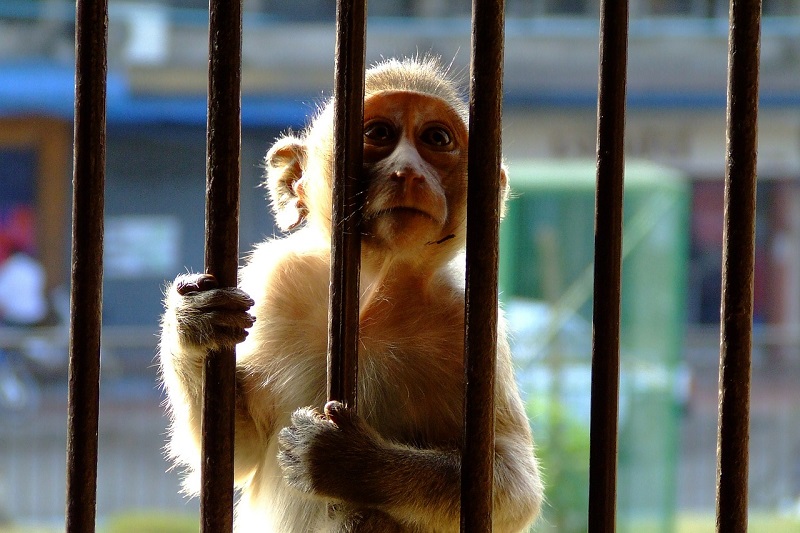 Inhuman treatment and torture of monkeys by the U.S. government continues unchecked in the name of science and the latest incident of monkeys from Africa going loose in Pennsylvania is a glimpse of government’s systematic abuse of trafficked animals.

On January 25 the New York Post reported on the incident in which 100 monkeys captured in Africa were being carried in small crates inside a trailer. Due to a crash, 3 of the terrified monkeys were able to escape captivity. But they were soon killed brutally.

CDC told the New York Post that the monkeys were “euthanized”:

All 100 of the monkeys were accounted for by Saturday afternoon — and three had been euthanized for undisclosed reasons, a CDC spokesperson said.

Where were these monkeys heading and for what purpose?

The story says that these were lab monkeys that had just “arrived from Africa” and were being taken to Florida to a “CDC-approved” facility for quarantine. In other words, these were captured in Africa to be held in prison and tortured in labs in America for research that would lead to making vaccines and drugs.

Futurism reported that what the CDC had called “euthanasia” was actually shooting to death.

The USDA is looking into why the three crab-eating macaques who escaped after a traffic accident in Pennsylvania were shot by state police.

According to the story, People for the Ethical Treatment of Animals (PETA) lodged a complaint against the shooting of the monkeys. Supposedly the USDA is investigating the incident – so essentially the government that captures and tortures animals to death is investigating itself. The story pointed to the many missing details in the saga.

PETA condemned the cruelty and abuse involved in the incident and called on the government to close down the monkey facilities and release the imprisoned monkeys to animal sanctuaries.

PETA is calling on the U.S. Department of Health and Human Services to close monkey facilities and transfer the animals held within them to reputable sanctuaries.

In November 2021, investigative reports revealed horrifying details of cruel experimentation on lab monkeys caged by the NIH (federal government) on an island off the coast of South Carolina.

Animal lab research has become a living hell for animals and the leading public health threat across borders and time zones. It’s way overdue to stop this sadistic science lab scene playing out in real life.