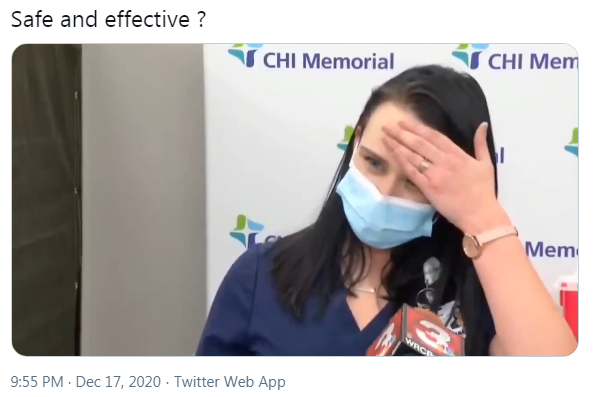 The video of a nurse in Tennessee getting the COVID 19 vaccine and then fainting on live camera went viral. It made news worldwide. Now, there is widespread suspicion that the nurse didn’t just faint, but actually died of the COVID shot.

The mainstream media staggered to come up with a justification after the viral video of Nurse Manager Tiffany Dover fainting within 20 minutes of getting the COVID 19 vaccine went viral. But suspicions soon arose about her safety as she completely disappeared from the media and the last thing people remembered of her was her unconscious body being held by multiple doctors as she collapsed while talking to media at the hospital. People started questioning whether she in fact fell dead.

The vaccine industry and its corporate partner mainstream media panicked since they had come up with a story to explain her fainting – that she suffered from a certain health condition in which she lost consciousness if experiencing significant anxiety or pain – a lame story that indirectly admitted that the COVID vaccine can cause significant pressure or pain to your system. But the news of her death would undermine the vaccine industry’s publicity campaign across the world since seeing is believing and millions saw what happened to her after the shot.

It is important to note that media never talked to her after the fainting incident. She disappeared from the scene. Instead the hospital where Dover worked started doing the talking for her: she is fine, she is alive, just taking a break, etc etc. The speculation surrounding her alive-or-dead status didn’t stop. Then her hospital posted an interesting video (included below) on their Facebook page supposedly showing her along with other nurses.

The very short video of 20 seconds didn’t quell the suspicions of people and for obvious reasons. It shows everyone masked so more than half the face covered doesn’t exactly show it is really her. People pointed to it. They commented that the woman in the video doesn’t look like her as there are obvious differences. Nobody talks in the video except one woman saying “all right” and then the camera pans over the staircase and back to show the nurses posing with a sign that shows the date December 21 – which is meant to be proof that the video is recent.

But why does nurse Dover, or whoever is in that video supposed to be her, doesn’t talk? This creates very suspicious air in the video. Why make a video where she is masked when though she took her COVID shot that is supposed to make her immune and stop the transmission of the so-called COVID virus? In fact, since all the nurses took it, why are they masked at all? The vaxxer’s story falls flat here.

But the biggest question is – is it the same woman in the video as the one seen fainting on cam days before during the COVID vaccination campaign? Comments on different video-sharing sites say they don’t believe it’s the same nurse or the same person and that there are obvious differences, like in the body shape, hair, eyes and so on. They are also asking how difficult it is for her to actually make a video without a mask and tell everyone she is fine.

Yet another question the skeptics are asking is her and her family being under threat. The medical mafia and the deep state are closely connected – if not one and the same – and it is likely that she is alive but has been intimidated into staying silent and off her social media so as not to undermine the vaccine’s publicity campaign that her fainting on live cam already has struck a blow.