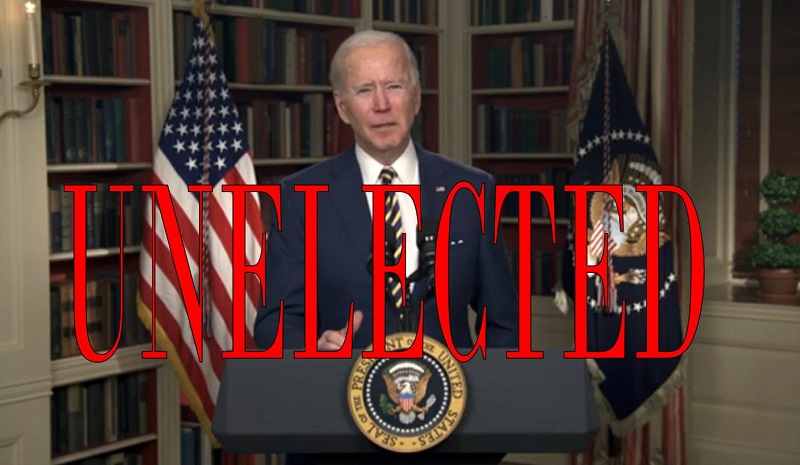 On January 20th, 2020, democracy in the United States died as Democrat Joe Biden was sworn in as the 46th President of the country without getting elected by people’s vote. Biden’s illegitimate presidency came as the fruit of the extensive cultivation of voter fraud via multiple means and sources all organized and executed by the forces that can be collectively called the establishment – the Democratic Party, many compromised Republicans, the deeply corrupt institutions, propaganda media mobs, and international agents pulling strings remotely.

For America, the 2020 election has erected a historical landmark that stands for the defeat of the constitution and the victory of anti-American establishment. The Illegitimate presidency of Biden brought an equally illegitimate Vice President, Kamala Harris. Aside from the mental health issues of Joe Biden, his open record of corruption as well as his son’s corruption spanning decades, all ignored by the compromised Department of Justice, have stained his unelected presidency even before it began on January 20th.

The biggest setback brought to the conservative America by the 2020 Presidential election was the disillusionment that it is their vote that elects the president. An openly rigged election that was challenged by President Trump – who never formally conceded – was certified by every institution and office paid by the US taxpayer to defend the country against such invasion. Millions saw the highest law enforcement and judiciary turning a blind eye and deaf ear to the evidence of massive voter fraud presented by the Trump team and the public.

That such a farcical election could happen in the United States of America without the justice standing up to it is still a shock to so many of those who believe America to be stronger and more transparent. Though it’s revealed now that 2020 is not the only time such election fraud happened, the disturbing fact that the fraud will win against the fight to defeat it is unique to this election. The power of the establishment working against the will of the people was not a secret, but the full force of its magnitude became a revelation like never before.

The days ahead for America are uncertain. There are true, good, and brave people on the conservative side, fighting to defend their country and its people. But how long will they last before the establishment usurps their rights and freedoms using the unelected Biden administration as its puppet? This is a question that haunts the minds of millions who live in and care about the American land and liberty. They know that their freedoms are under attack and the new administration planted there via an openly rigged election is ever more vindictive and desperate to reverse whatever was achieved by President Trump. The post-presidential impeachment show, the vicious attacks on free speech social media sites like Parler, cancellation of conservative public figures, and opening the borders to flood the country with invaders for nationwide demographic change are some of the early measures the unelected Biden-Harris admin and its liberal fascist network are pursuing already.

Conservatives in America will now need to unite and fight back like never before. Boycotting big business and particularly the propaganda mobs – aka mainstream media – will be vital for defending their freedom far as possible. America was called “fallen” on January 20th, but it is left to the people to work on a solid defense strategy to make America stand back on its feet and bring a real elected government back in place. One can hope this is achievable.