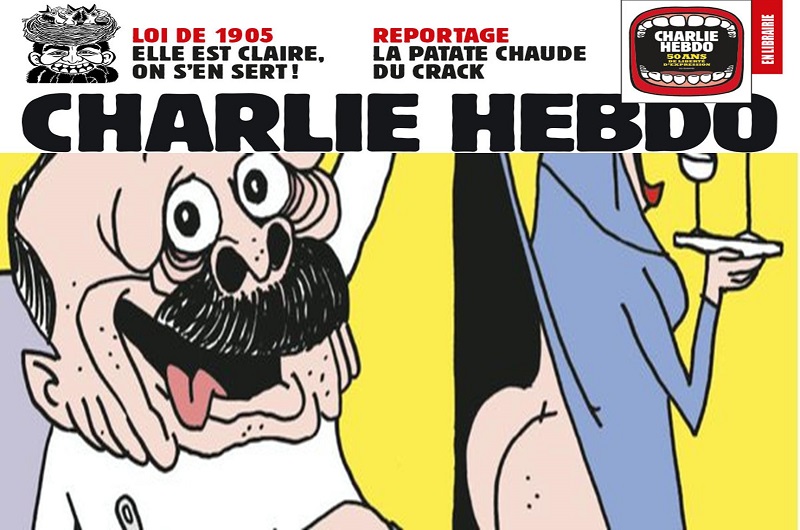 In the escalating political-cultural battle between Islamists and French secularists, French satirical magazine Charlie Hebdo has printed a cartoon of Turkish President Recep Tayyip Erdogan on its front page.

The cartoon depicts a caricature of Erdogan holding a beer and taking a peek at the privates of a Muslim woman’s figure in her hijab (head scarf). The cartoon comes with the text “Erdogan: in private, he’s very funny” in French. The punch line draws from the public image of Erdogan as an assertive Muslim leader that wears his Islamist policies on his sleeve and is always seen with a frown. The magazine pinned the cartoon to its Twitter profile.

Erdogan reportedly isn’t happy with his cartoon in Charlie Hebdo and Ankara was quick to accuse Charlie Hebdo of “promoting hatred” after the cartoon came out.

The cartoon comes in the wake of Erdogan’s jab at French President Emmanuel Macron and suggesting Macron is mentally sick after Macron defended the right to free speech in France regarding the cartoon controversy and promising to crack down on radical Muslims in France. The furor against Islamic terror arose once again after an 18-year-old Muslim refugee from Chechnya murdered a French teacher, Samuel Paty, by beheading over blasphemy. The 47-year-old history teacher had shown Charlie Hebdo’s cartoons of Muhammad in one of his classes.

Charlie Hebdo became the target of Islamic terrorist attacks in early 2015 when it reprinted the controversial cartoons of Islam’s prophet Muhamamd that were originally published in 2005 in the Danish newspaper Jyllands-Posten. A total of 17 people died in those attacks and led to French secular activism against the Islamist demand for ban on what Muslims consider blasphemous content.

Since then multiple Islamic terror attacks have targeted French people in different locations over incidents that qualify as freedom of speech in secular French law but as blasphemy by Islamic law followed by Muslims in France. Charlie Hebdo decided to defy Islamism by reprinting Muhamamd’s cartoons around the end of August 2020.