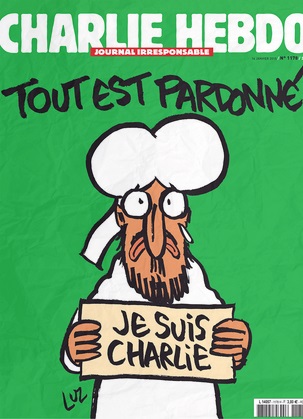 The terror attack on Charlie Hebdo and the fallout of the mag’s “blasphemous” caricature of Islam’s prophet Muhammad has reinforced the longstanding impression about the psyche of fundamentalist Muslims – a psyche defined by double “I” – insecurity and ignorance.

The insecurity of traditional Muslims around their prophet’s honor is well and widely known. According to the mainstream versions of Islam, depicting the prophet in any way in art is prohibited. Although not all Muslims have followed this rule, most to date have stuck to it so much so that any attempt to depict Muhammad in any way in art – positive or mocking – can be declared as blasphemy.

Why are hundreds of millions of Muslims so afraid to see their prophet depicted? The key point is the concept of perfection. They view their prophet as so perfect as unable to be justifiably portrayed in pictorial form. They are very happy to sing verbiage of praise in his glory – most handsome, most kind, most truthful, and so on. Since depiction is likely to reveal imperfections that are true of any human, the fear of seeing Muhammad is at the core of their perfectionist belief system.

Added to this frailty is the ignorance of majority of Muslims, and particularly of fundamentalist Muslims, who are mostly deprived and uneducated (and that means not just formal school literacy, but emotional intelligence and civilized ways of thought and action). They are unable to respond in word. And thus their immediate and many times only resort is violence. to answer satire or criticism, one needs a certain degree of education which assures them that their ideal is too strong and secure to be hurt. Lack of such education implies the tendency to get violent and try to scare the opponent away.

Does this kind of ignorance and insecurity work in favor of their ideal? Not really. It actually works the other way around. More violence shows greater insecurity and ignorance, and a greater degree of opposition is encouraged to attack the vulnerable spot that hurts so bad by mere use of words or a few strokes of a soft brush. As one sign of Charlie Hebdo’s success, its sale already has jumped from 50 thousand to an estimated 7 million copies (at least) of its new edition. And it already has published a new cartoon of Muhammad with probably more publications to follow suit.

In the long run, the pen, or brush, is mightier than the sword.