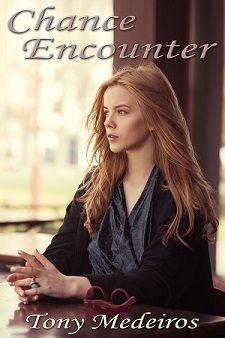 This second novel from the talented Tony Medeiros is a Cinderella story with a twist. The well-to-do narrator, Joseph Perry, has big dreams for Carolyn Laplante, the intriguing young housecleaner he observes at a café one morning as she tries to drum up business. It takes him a while to find her again, but find her he does. Things go from there, both professionally and then very personally, as Carolyn rises in the world.

Of course it requires more than the wave of a wand to transform Carolyn from someone who earns a very low income and looks it to a glamorous and self-confident executive running a thriving business.  But together, Joe and she accomplish what he always knew was possible for her. Eventually, though, Carolyn’s ambition becomes her downfall. Both she and Joe have to suffer in different ways before she gets on a sustainable career path and he realizes that his own work is no longer bringing him self-respect or happiness.

Other characters in Chance Encounter include Joe’s bosses, colleagues, friends, and parents, as well as a sleazy Massachusetts senator. There is a fascinating relationship between Joe and Peggy, the wife of his best friend. It’s almost brother/sister, but there is some subtle, underlying sexual tension that is never overtly expressed.

Interestingly, as his editor, Tony told me that the events in the entire first chapter actually happened. “All the rest, though,” he said, “is my imagination.” And his imagination is rich indeed.

For a romance novel, the actual sex scenes are relatively few and rather understated. This is no bodice-ripper. But if you enjoy well-developed novels featuring diverse difficulties and happy endings, this one is for you. Set in Boston and the environs, the story is sure to offer extra enjoyment to readers from that area of the country.

In e-book and print from Amazon and other online sellers. For more details, see the author’s website: www.dvorkin.com/tonymedeiros/.