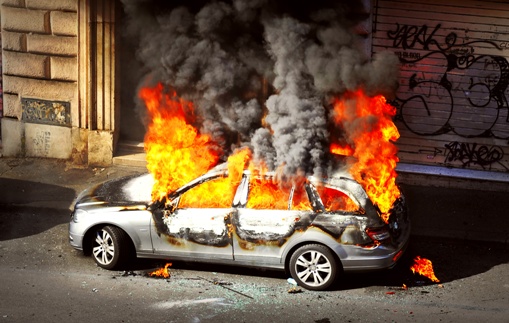 No matter where in the world, it’s long been a strategy of thugs and criminals to use the cover of protest for an opportunity to loot and plunder. Currently this is happening in Baltimore, MD, where “racial protests” have run amok after a young black man arrested by the police died in their custody.

The Baltimore Sun summarized the situation in the city, highlighting the incidents of violent rioting that left 15 police officers injured. Most of those at the forefront of riots and clashing with police are reportedly Afro-American young people, mainly teenagers. A curfew has been announced and emergency declared in the city.

Pat Dollard’s headline for the rioting situation in the city runs as: Baltimore Thugs Burning Cop Cars And Looting Stores. And the photos essay shows “protestors” carrying paper towels and stuff in shopping bags with a police car in flames in the background. And this is pretty much the story of these protests – racial or otherwise – in many parts of the world. The outcry against law is made an opportunity to stop law from protecting others’ property from plunder.

Is setting property to fire and robbing stores in any single way going to support the cause of justice for the dead man? I doubt it. There is no justification for such crimes. If you need paper towels, you need to work and earn the money because that is how things work in civil life.

The message of the City Counsel President to the protestors engaged in looting sounds an appeal to sense: “We you loot the CVS store that means that your relatives who work in those stores can’t go to work, so they can’t get paid.” But he must have guessed that these people don’t care. They have an opportunity that they created or jumped in to avail, so they’ll try to make of it whatever they can.

Police brutality exists – to my knowledge it does, and it exists beyond race. If police brutality is a crime, answering it with more crime while targeting innocent people is a bigger crime. It does not stain the police; a crime will only stain the criminal’s character – if they have any.