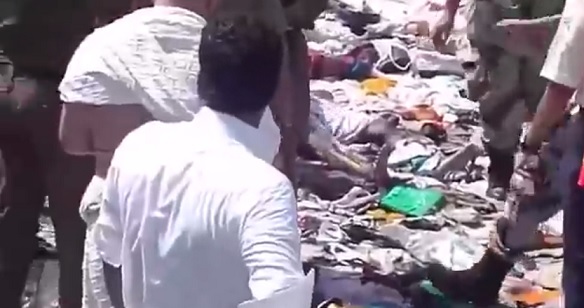 More than 700 people died in a stampede in Mina, Saudi Arabia, while performing their famous religious ritual of Hajj (pilgrimage). It is now being called one of the biggest tragedies for pilgrims in the past 3 decades of history of Hajj. But that is questionable.

Aljazeera reports that the number of dead reported so far is at 717 and the death toll continues to rise while 863 pilgrims were also injured in the stampede. Cell phone videos made on spot by people present there show scenes of misery with dead bodies scattered about the place and people searching for their loved ones. There is no report of who or what started the panic that caused so many deaths and injuries.

Is this the biggest tragedy in Hajj’s history? Not really. Every year, as an integral part of their Hajj ritual, each individual/family performing the pilgrimage slaughters at least one animal by slitting their throats—the number of innocent animals slaughtered runs in millions. That is the biggest tragedy (read ethical crime) allowed on that land each year.

Given the cruelty the animals are subjected to, it won’t hurt to say it’s bad karma. Killing doesn’t always bring blessing; it has its own curse and there’s no escape.