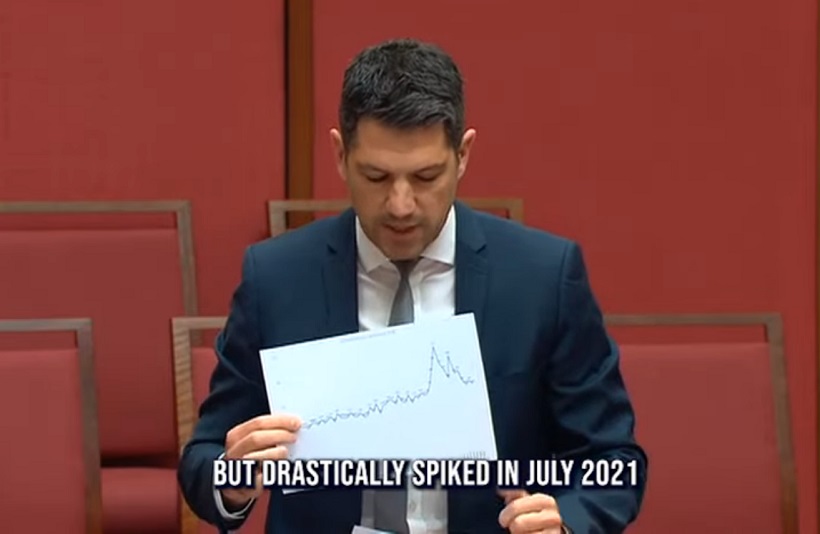 In the description with his YouTube video of his speech on the senate floor, Senator Antic wrote:

In July 2021, cardiac-related presentations in South Australian public hospitals dramatically spiked in those aged 15-44 years! From January 2018 they remained steady at around 1,100 per month but drastically spiked in July 2021 through November 2021 peaking at 2,172 per month, just as the injections were rolled out!

The South Australian senator called the data that he got via a Freedom of Information (FOI) request from South Australia’s health department “shocking”:

Senator Antic is also seeking the documents of contracts between the Australian government and various pharmaceutical companies that supply the COVID shots. He introduced a COVID Injection Transparency Motion in the senate, which was opposed and shot down by votes of Labor party and Australian Greens Party (both left-wing political parties). Antic said in a video following the vote that he was not surprised to see the two opposing parties voting down the motion that seeks transparency.

Mainstream media has ignored Senator Antic’s speech and one of the very few sources reporting on his transparency motion is The Australian.

Note: In Australian politics, The Liberal Party is considered a right-wing party so a “Liberal” politician in Australia is a conservative in American political lingo. The Labor and Green parties are left-wing and its members and leaders are thus leftists in an American perspective.