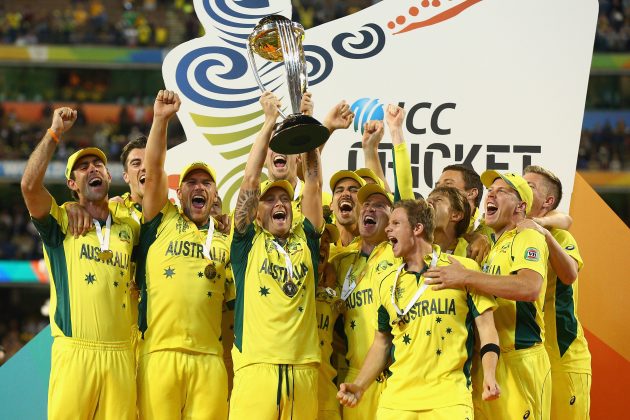 Australia easily overcame New Zealand in the 2015 Cricket World Cup final at the Melbourne Cricket Ground yesterday. It was the fifth cricket world cup that the Aussies claimed, though the first one won on their soil.

New Zealand had reached the final in any cricket world cup for the first time. The game proved quite one-sided as the Australian side dominated the match from the start to the end. Batting first, the Kiwis lost important wickets early and were all out for 183 in 45 overs. See IBN Live Scoreboard

It was easy chase for Australia and they hit the target in only 33 overs at the loss of 3 wickets, playing with confidence and control. Captain Michael Clarke scored 74 off 72 balls and David Warner made 45 off 47 balls. Steven Smith remained not out at 56.

In bowling the Kiwis out, James Faulkner and Mitchell Johnson each claimed 3 wickets. Grant Elliot was the only New Zealand batsman who showed some spunk by hitting an impressive 83 off 82 balls.

So the Aussies kept their home world cup trophy, making a record of 5 world cup victories in cricket’s history – with 2 titles won by the West Indies and India each, and one by Pakistan and Sri Lanka each. Australia has also ended as runner-up twice in the world cup.