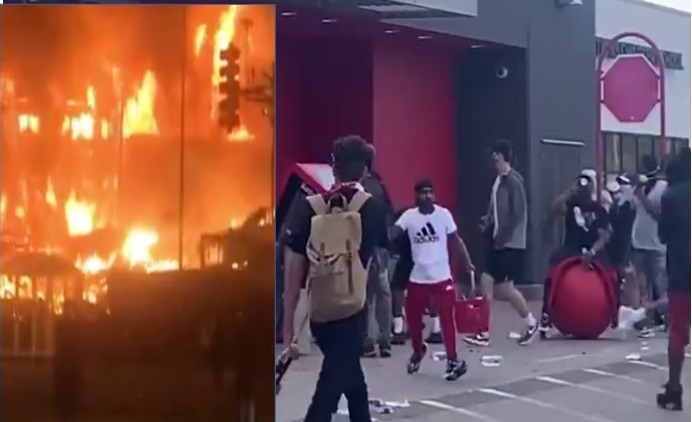 Conservative states are passing anti-rioting laws and criminal-minded leftist propaganda mobs are angry over it.

Branches of leftist propaganda machinery, like ABC News, actively advocate for violent criminal mobs, like Black Lives Matters (BLM) and ANTIFA. In its story titled Florida’s governor sued over new ‘anti-riot’ law, the leftist propaganda outlet reported on a lawsuit filed against Florida’s new law that punishes acts of violence committed in the name of protest.

The so-called anti-riot bill that DeSantis signed on Monday was a response to nationwide demonstrations that occurred in the wake of George Floyd’s murder.

Demonstrations? The looting of stores, burning of buildings, direct assault on police and civilians, and numerous other acts of violence and destruction were dishonestly grouped as “demonstrations” by ABC. Other leftist propaganda mobs reacted the same way. The Independent called Florida’s anti-riot law “one of the most dangerous bills in America”.

Republicans are calling it an anti-riot bill. The reality is that it’s anti-democratic, anti-public safety, and anti-American.

Such political propaganda by the anti-American sources has exposed their advocacy for mob violence some more. Just like the Democrats protect and promote mob violence in their big cities – Portland, Chicago, Minneapolis, New York – to name a few, the propaganda wing of their party namely mainstream media, routinely lies to mislead dumb audiences into believing that the mobs have a right to rob, steal, burn public and private property, and physically attack anyone in the wake of police shooting thugs that happen to be black or brown or other non-white criminals.

Multiple states governed by conservatives are following the example of Florida and passing laws to check leftist-sponsored violence wrongly called “protest” by leftist propagandists. The reality of the matter is that these propaganda mobs are part of the same big criminal network that sponsors, organizes, and politically backs violent mobs like BLM and ANTIFA to create fear and chaos in otherwise peaceful towns. When laws are formed to hold the criminals accountable, the propaganda networks are mobilized to rant against lawmakers.