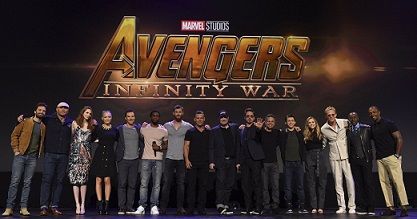 2018 has already been a busy year at the cinema, simply because Black Panther shocked the world. We

know that Marvel properties are going to make for major events, and furthermore we knew that Black Panther was of particular significance for being the first MCU movie to feature a black lead superhero. What we didn’t know is that it would cross the $1 billion threshold at the box office in a matter of four weeks. It appears to be en route to becoming one of the most successful films in history.

Because of this, we may not see a more significant film event (in a few different ways) for the rest of 2018, let alone the spring. But there are still some pretty big films on the way this season, so we thought we’d preview a few of them.

We can’t set the stage for Tomb Raider better than an online arcade game based on the same franchise does: when the impeccably spoken, twin-pistol-toting archaeologist exploded onto the PlayStation back in the ‘90s, she took the world by storm. Lara Croft has been around since that time, but has been resurgent the last few years, leading to new games and at long last a new film adaptation. Alicia Vikander will take over the lead role (which once belonged to Angelina Jolie) in what promises to be a very exciting adventure film.

Wes Anderson movies are pretty much guaranteed to cause a stir. Two of his more recent efforts, Moonrise Kingdom and The Grand Budapest Hotel have basically been reviewed as instant classics, so here’s hoping for more of the same. This is a very different project though: it’s an animated film about a boy searching for his lost dog in a future in which dogs have been quarantined on an island. Among the voice actors are Bryan Cranston, Bill Murray, Edward Norton, and Jeff Goldblum.

This is a pretty interesting project and seems to have a chance to become one of the bigger science fiction pictures of the year. For those who don’t know, it’s directed by Steven Spielberg and based on a sort of cult classic novel by Ernest Cline, concerning a futuristic social network of sorts that more or less takes over the world. Or at least that’s the idea. People coming out of early screenings have emphatically recommended reading the novel first, but it sounds like it’ll be a fun watch.

We don’t need to talk about this one a whole lot. If you were a fan of the first one – a raunchy, shocking, hilarious comedy that came out of nowhere from a comedy troupe called Broken Lizard – you probably can’t wait. The whole gang is back for this one.

Similarly not too much needs to be said about Avengers: Infinity War, other than that it’s Marvel’s biggest film yet. By the look of things, the cast and scope of Infinity War will about triple that of Avengers: Age Of Ultron, which in a way means it will be unlike anything we’ve ever seen on the big screen. Plus, it’s a quick opportunity to see more of our new best friends from Black Panther.

Here we have more Marvel, and a movie that’s going to have a passionate following from day one. The first Deadpool was in a way the most surprising thing we’ve gotten from Marvel yet – an R-rated spoof, riotous comedy and surprisingly solid action flick all rolled into one. Ryan Reynolds will be back in action as the studio’s most irreverent hero in a film that actually has a chance to offer more raw entertainment than any other on the list.

People are nervous about this one, but it should still draw massive crowds. The project about young Han Solo is the second of a planned web of unconnected Star Wars spinoffs, and has gone through multiple directors, with Ron Howard ultimately taking over. At the end of the day though we’re getting a movie about young Han Solo! And the cast, including Emilia Clarke, Donald Glover, and Alden Ehrenreich, should be a blast.

Brian Tatum is a culture and lifestyle writer. He contributes to several different platforms in a freelance capacity, and is the author of a forthcoming book about book-to-film adaptations.