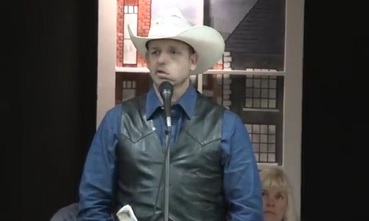 Is it the time that the earth finally shakes enough, and California falls into the ocean, making AZ and NV ocean front property, as it seems it would with the announcement of Ryan Bundy for Gov Nevada?

Bundy told The Nevada Independent in an interview on Thursday that he plans to file to run for governor as an independent on March 14 and will run on the same state sovereignty principles that made him and his family household names during a 2014 armed standoff with the federal government over unpaid grazing fees.

Bundy said Thursday he doesn’t think other candidates running to replace term-limited Republican Gov. Brian Sandoval would properly protect the state’s liberty. “The state of Nevada needs someone who will stand up for statehood, and recognize that Nevada is a sovereign state, not just a province of the U.S.,” he said.

The Democrats have plenty two be worried about if Bundy were to be elected. His family has twice fought the federal government, and won—as unlikely as that seems (both were considered armed conflicts).  It is a polarizing situation than many Americans who have fought and lost to the feds on lesser grounds/charges are sure to be able to get behind.

While Mr. Bundy understands that his entrance into the race could open the door for votes to taken away from the Republican candidate and give the Governorship to the Democrats, he is not worried.  For one this author’s opinion is that it works both ways—he may very well steal votes from both parties’ nominees; besides, in today’s world of blurred party lines amongst voters, is there really a true R vs D?

What makes this more interesting is that the stances being taken by Bundy’s opponents are having a war of words, which in turn may actually help Bundy. Republican candidate Craig Mueller criticized his primary opponent, former Assistant Attorney General Wes Duncan, for the attorney general office’s stance.

In Mueller’s words as cited by The Nevada Independent , “On at least 3 occasions federal officials were caught lying to a federal judge.” Given the fact that the local, state and federal authorities mishandled the case so badly; giving themselves what amounts to two black eyes and a broken nose—they may in fact have become their own worst enemy.

While Bundy may gather enough signatures to be on the ballot, does he stand a real chance? I would like to think so, making some other states potentially follow suit. Give the feds something to think about before they try to walk all over us. The way the land out west is being handled (like many of our rights) given by the constitution amounts to at best oligarchy or Autocratic/Elitist bordering on tyranny.

All about principles? That is the road that Ryan Bundy is taking in this quest to run for Governor of NV. Perhaps if there were more people who stood on the grounds of principle, there would be a lot less butt-sore, snot-nosed snowflakes who need a cry room and a safe word because they were called out for doing something stupid or more the point not at all.