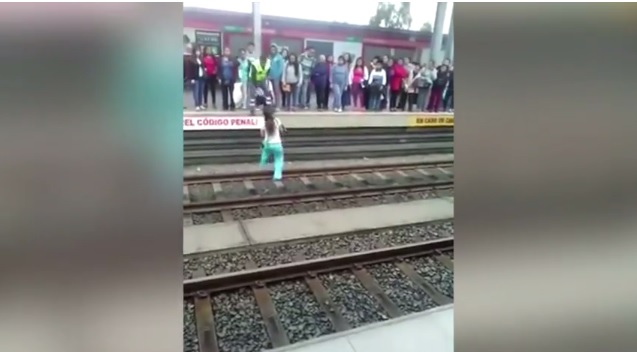 A brave woman in Lima, Peru, saved a dog from being killed by an oncoming train. But instead of being rewarded for her courage, the authorities are charging her for defying rules regarding safety.

The story on AOL informs that the dog, belonging to another woman among the people at the train station, got loose and ended up on the Metro de Lima train tracks. The dog was unable to climb back while her owner and others, including security personnel, watched and did nothing to help.

Then, as shown in the video, this helpful woman spotted the dog and without waiting for security or transport officials, she leapt up to the dog and got him off the tracks and back to the owner.

Obviously what she did qualifies for heroism. But shockingly, the train officials are trying to press charges against her for defying rules and compromising safety. The punishment for such violation ranges from 6 months to up to 6 years in prison.

A Care2 petition supporting the brave woman addresses the Peru Metro Authority Station Manager to demand not punishing this woman for her help and life-saving work. The petition has been signed by well over a 100K people so far and the public’s support for this woman continues as she is hailed as a hero.

The case in question highlights the defining trait of an oppressive regime where if a government officer (representative of the rulers) saves a life, he/she is rewarded and famed; but if a civilian does the same, he/she faces punishment or shame.