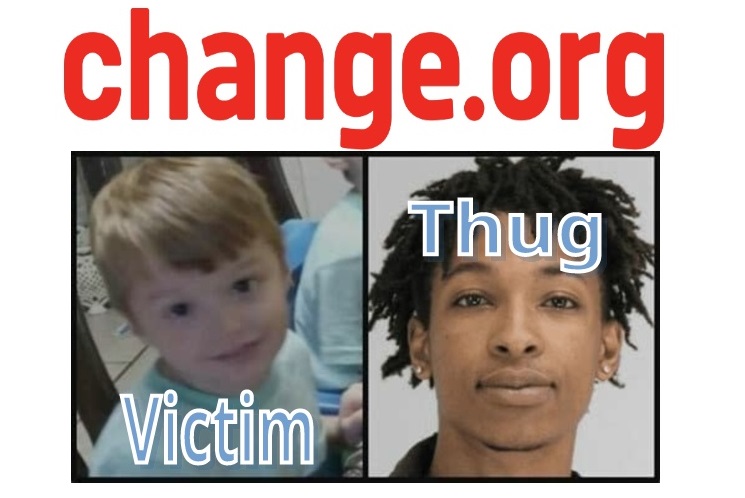 The gruesome murder of a 4-year-old white boy, Cash Gernon, after he was kidnapped from his bedroom by an adult black thug, has been shamelessly ignored by leftist propaganda mobs like CNN, NYT, Washington Post, and others. Yet, the conservative-leaning news sources have posted about available details of the crime that shook Dallas (Texas) where it happened, and the nation. Now a petition has been launched to demand protection of white people against hate crimes by people of color.

The Change.org petition is titled “The United States Congress Must Pass The Cash Gernon Justice Act” and calls on US Congress to protect white people against attacks by people of others races just like they passed a bill to protect Asians in America against interracial attacks.

White people need to be protected from interracial attacks, just as much as Asians do.

Though this is very unlikely to happen as anti-white Democrats, who control the house and some compromised Republicans vote with them, make the majority in the congress. They protect criminals and encourage, even support crimes against peaceful Americans, particularly white conservative people.

The petition also demands that the congress pass the Insane Asylum Revitalization Act into law as that would prevent mentally disturbed criminals like Darriynn Brown from attacking civilians.

People like Darriynn need to be confined to an Insane Asylum and cannot be properly controlled with a silly bracelet.

As the internet continues to censor stories about black crime, the petition itself seems to have suffered politically correct editing. The first sentence of the petition reads: “Cash Gernon, a 4 year-old boy, was kidnapped from his home by Darriynn Brown on May 15, 2021.” However a Google search shows that the sentence had the words “white” and “black” to describe the victim and the thug respectively. It seems soon after the petition was launched, the two words specifying the ethnicity of the victim and the criminal were edited out, though they were saved in the SEO description automatically upon posting.

In my previous post about this brutal crime, I already asked for death penalty for Darriynn Brown. He has no right to live whether in or outside prison. It doesn’t matter whether he is killed “mercifully” or lynched publicly to death; the pain and terror he inflicted on the innocent 4-year-old is more than enough to justify the strictest imaginable penalty for this inhuman thug.