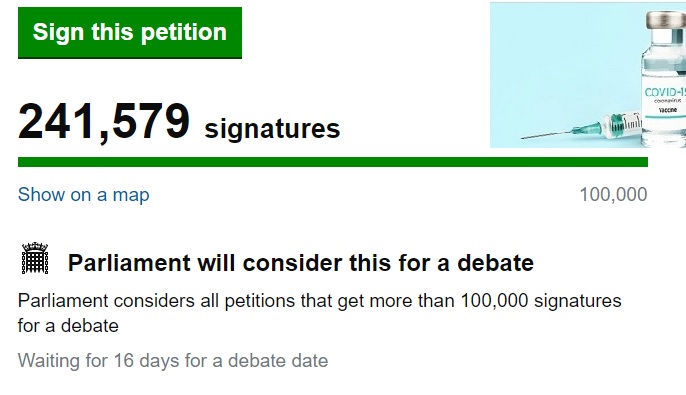 The petition titled “Do not rollout Covid-19 vaccine passports” on the official Petitions page of the UK government website reads:

We want the Government to commit to not rolling out any e-vaccination status/immunity passport to the British public. Such passports could be used to restrict the rights of people who have refused a Covid-19 vaccine, which would be unacceptable.

The description of the petition points to the contradiction in the British government’s position in December when their “vaccine minister” Nadhim Zahawi stated that the government had no plans for introducing vaccine passports.

It didn’t take long, however, for the government to shift their position and in January, as LifeSite news reported, it admitted working on introducing vaccine passports. Then in February, they told the people that vaccine passports could be required for the people even domestically to return to normal life.

The petition website notes that British Parliament considers all petitions that get more than 100,000 signatures for a debate. The current petition rejecting vaccine passports for British people has a set deadline of July 20, 2021. It already has surpassed its required number of signatures to initiate a parliamentary debate.