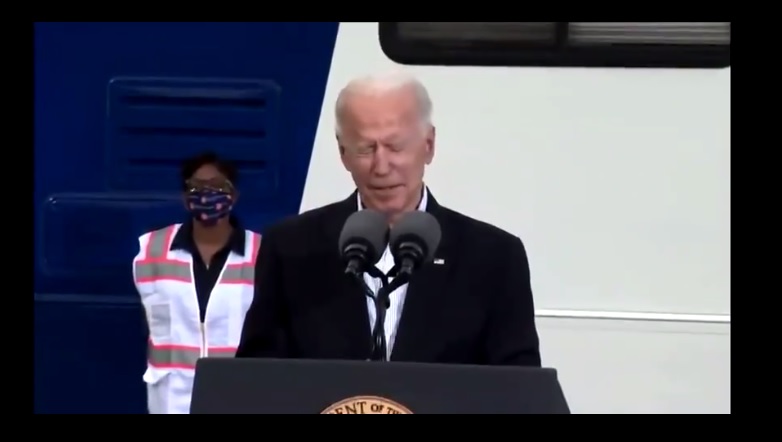 Massive voter fraud and compromised institutions made him the unelected president of United States in January 2021, but now the problem is how to fix his mental health. Yes, America’s unelected president Joe Biden had another publicly embarrassing episode of failed tongue with a failing brain as he spoke at a COVID vaccination site in Houston on February 26th.

Leftist propaganda networks, aka mainstream media channels, mostly edited out parts of his speech where he struggled to read his speech from a teleprompter. But his full speech was posted on C-Span and the most embarrassing memory-tongue failures of his in the speech were posted in a short video clip to free speech video sites. Enjoy the teaser.

As he starts his speech, Biden struggles with the names of two Democrat congresswomen from Texas. He calls Sheila Jackson Lee, “Shirley Jackson Lee” and Lizzie Pannill Fletcher, “Lizzie Pannilli”. Biden is seen closing his eyes and showing mentally struggling to remember what he had to say as he utters “excuse me…” then correct himself “Pannill” – seemingly as he is told the exact work via an ear bud. He then goes on to ask himself “what am I doing here?” and adds, “I’m goanna lose track here.” He looks at his notes to get the names he is supposed to say.

Biden continues his speech semi-steadily and advertises the COVID vaccines in great detail. He repeats the big lie of the pharmaceutical mafia: Vaccines are safe and effective. Of course he has no idea what he is talking about as he is acting as a parrot of the establishment that installed him in the office and are pulling his strings every step of the way. Biden also repeats the lie of half a million COVID 19 deaths in the US, which is a claim lacking forensic evidence backed by verifiable autopsy reports.

Interestingly, it was the same Biden who was on the stage at an event a day earlier without wearing his mask after his speech in which he begged people to wear a mask. When he faced Kamala Harris, she whispered to him “your mask” and as he realized he was chatting with his team on the stage without his mask, he ran back to the lectern to get his mask, saying “my mask, my mask….”

Sad but true of the unelected president Biden: mentally gone!