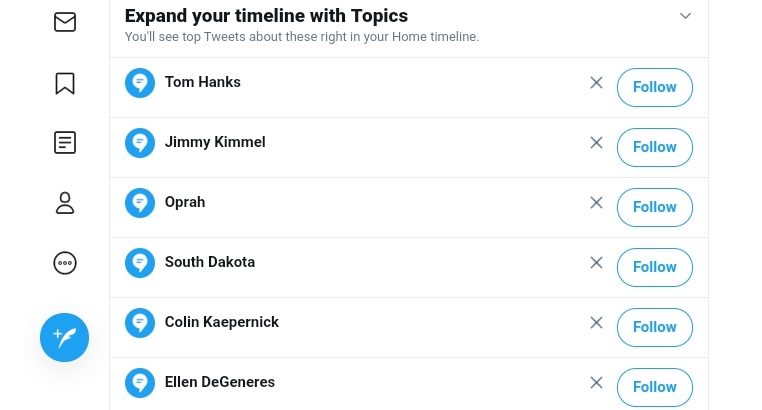 Just days ago, I was put in Twitter Jail – aka restricted use of Twitter – when a swarm of sore Twits (liberal Twitter users) tried to gang up on me after I posted a comment in response to an anti-Trump Tweet by a libbie with a large number of followers. In response to their attacks and insults, I dealt with each and every one of them – to the point of chasing them away. And on my second day of that online fight of nasty comments, Twitter restricted my activity. I don’t know whether it restricted the libbies that were coming at me. Twitter Jail I feel is likely used for conservatives/right-leaning users exclusively or more than for the other side.

But another trick the clearly left-leaning Twitter plays is running suggestions/ads on my live Twitter timeline for promotion of leftist politics/views. At times I’ll see an ad for a lefty/Democrat politician. And then I’ll things like this that was flashed to me today.

Now these are all liberal rags, except the state of South Dakota – which they seemingly included to look non-political – you know like putting an icing on a mound of rat poison to make it look like a cake. Why on earth would Twitter think I’d follow any of these ugly dirt-bags? And then, where is the balance? Not a single right-wing or conservative name to follow for a suggestion!

Twitter has also been widely reported to manipulate the number of followers on the conservative/right-wing accounts, particularly Trump-supporters. Different blogs have been written to explain this drop in follower count, like this one on Slice Communications, and I am not sure if libbies experience the same drop in number of followers. But my conservative friends routinely report regular drop in the number of their followers and I have personally witnessed it too. We strongly suspect that Twitter is selectively targeting right-leaning users in manipulating their Twitter follower numbers.

As the 2020 election approaches and President Trump continues to get more popular among his followers, Twitter is likely getting more nervous and it won’t be surprising if it launches some other game(s) to favor the loony left and target the right. We just gotta keep our scanners peeled.

My suggestion: maintain your Twitter presence but do open accounts on alternative social media on free speech/conservative sites like Parler, USA Life, Gab, and Bitchute or Brighteon etc.