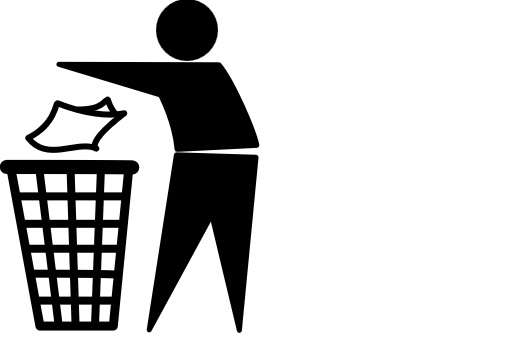 Yesterday, my aunt came home from her daycare job and found me pulling weeds out of the flower bed. It was trash day. I have always looked forward to getting the trash out of the house.

“You can start loading the SUV!” Dear exclaimed. I walked inside and began gathering up the trash bags full of trash, a whole week’s worth. I took the trash bags from the kitchen, utility room, and living room and tied them. I told Dear if she would wait for me that I would get the weeds I had just pulled. She gave me a trash bag for those. The only bag left was the heavy bag in the utility room. At eighty-two, Dear can’t lift heavy bags, and right now, she is afraid for me to lift them with my right arm. But I got it out, and we took the trash around to the dumpster in the alley behind our home.

Dear was very upset. She had a few nice things to say that I won’t repeat; this regarding the neighbors leaving trash by the dumpster. We got out and put the trash in the dumpster and headed back home.

For the benefit of the reader, Dear is what I call my aunt. I never give her name out, and I call her dear all of the time anyway. I gave her this name because she has been good to me all of my life. I don’t know where I would be without her.

Ordinarily, before the accident, I would have been in the alley, picking up that trash. Like Dear, I get annoyed when other people leave their trash in the alleys where anybody can step on it. But they don’t seem to care. I unfortunately perhaps, feel differently.

From 1975 to 1977, I worked in San Angelo at the West Texas Lighthouse for the blind, putting pens together. San Angelo is three hours away from Odessa. I would ride the bus home on Friday nights, Dear would pick me up at the bus station.  Every time they would come to get me, without fail, I would have a plastic bag of trash with me. Dear could never understand it.

Why do you bring all of that trash from the bus for us to throw out?” she would ask.

You have no idea how ugly and unsightly it makes the buses look with trash everywhere.

They have it under the seats, in the aisles, it’s everywhere you look.”

When I moved home in October of 1977, trash detail became one of my chores. I had to help take the trash bags out of the trash can, and then I was responsible for getting them in to the dumpsters. Dear and Mamma couldn’t do it, that was my job, a job I was proud of. It was every week’s chore, twice a week.

When I started walking in the alleys in the early part of last decade, I noticed the trash piled up in the alley behind our home. I always stopped to pick it up. It didn’t matter what it was, I would get it and put it away. Eventually, when I ventured to the next block, and then to both sides of the street, it was the same thing. If I saw anything lying around, I would get it. I Would go so far as to look behind the dumpsters. Broken bottles, diapers, anything was fair game. If it was certain that it belonged in the trash, in the trash it went. This activity persisted for a number of years, to the consternation of my friends and family. They were afraid of germs, and rightfully so. Despite their concerns, (which weren’t taken lightly), I saw keeping the alleys clean as a way to contribute to the welfare of the community. If I wasn’t pulling weeds, or picking up the trash, I felt that I had too much time that needed to be taken up with an activity that was geared toward benefitting someone else.

Coinciding with my cleanup efforts, I would recycle aluminum cans the neighbors would save for me. Every dime I made from those cans was money that I didn’t have to take from my bank book. It may have been seventy dollars at most, but that was pocket change that I could use for things we wanted to do. Sometimes, that money went for supper for dear and me. I can’t count the meals those cans paid for

As the years went by, major changes were made. The laptop replaced the need to go out and forage through the alleys for trash to throw away. Groups like Behind Our eyes and publications like Consumer Vision Magazine have provided me with an outlet that allows me to reach a wider audience. All of this began with The Permian Basin Poetry society. I Joined in June of 2009, and have never looked back. My participation in this group was only the beginning, and everything that has followed has been just as enjoyable.

But not all of the changes were pleasant. On June 12, 2014, I was struck down by a pickup truck while making a return trip to the house. My right arm was fractured in several places, and I sustained other injuries that put me in the county hospital for a month, including a stay in rehab. I had to learn to walk again, and it was several months before I could use my right arm. And then, the metal plate that was inserted in that arm was exposed for over a year; finally, I got the courage to have it removed when the orthopedic surgeon told me I wouldn’t lose function in my hand and arm. At the very least, I can write.

Would I pick up the trash again if I thought I could get away with it? The temptation is very strong, especially when we step on the trash other people leave behind. Dear has said,

“That is their responsibility, not yours.”

As she sees it, if they don’t pick it up, they can get fined. I always thought somebody had to do it, so I always did it. But I remember what my emergency room nurse told me the night she had me in her arms in the ER. I told her about how I got tagged by the truck, to which she replied:

“That’s why you don’t go out walking by yourself! She tapped me several times on the left shoulder. ”

I can’t go against Summer, and she isn’t the only one. Be that is it may, the temptation is still there. I guess if I ever admitted it, the act of picking up the trash in the alleys became an addiction unto itself. I also saw it as a part of my spiritual practice, it was an activity that benefitted somebody else. Here again, only the reader can decide who is right.

One thought on “Trash Detail”