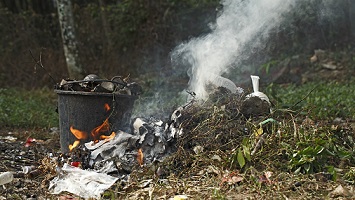 Do you burn trash in your backyard? If so, did you know that the gases emitted from burning garbage can be detrimental to your overall health? According to a news article I found on the Nature World News, studies show that more than 40% of garbage around the world is burned in open fires.

And as a matter of fact the amount of trash being burned is not reported to the Environmental Protection Agencies (EPA’s), around the world. When people burn their garbage in open fires, they are releasing dangerous gases, such as carbon monoxide, mercury, carbon dioxide, and other dioxins and particulates into the air, as smoke billows out from the open flames. As a result of these open fires not being reported, no policies have been implemented to prohibit this practice.

This same study found that of the 1.1 billion tons of garbage burned each year, the majority of trash is burned in developing countries, such as China, India, Mexico, Pakistan, Brazil and Turkey, which have fewer incinerators and landfills, for which to dispose of their garbage.

It is important to note that the smoke from burning particles such as Styrofoam, plastic, lead, and other such toxins, can affect children, elderly people, and those with asthma and other lung diseases. Smoke from burning garbage can cause nausea, headaches, rashes, and lead to heart attacks.

When farm animals eat feed that has been contaminated by smoke from burning garbage, these chemicals get concentrated into their bodies. In this case, the milk and meat are laden with highly toxic compounds called dioxins, which in turn are concentrated into our food supply. Dioxins are especially harmful to children, elderly people and expectant mothers. The dioxin that is released from a burning barrel can damage a person’s endocrine glands, thus disrupting his or her reproductive system. These dioxins also cause developmental problems and weaken the immune systems in people and animals.

There are ways you can reduce garbage in your home or business. For example, if you have gently used clothing, why not pass it down to another family member or donate it to a thrift store or charity. You can also purchase reusable grocery bags, which are more durable than the plastic or paper variety. However, if you have plastic grocery bags lying around, these bags can be reused in your own home, as storage bags for items you wish to donate to your local thrift store, or charity. Find out if recycling centers will take old newspapers, and plastic food containers that are unable to be reused.

What actions do you take to reduce the amount of garbage in your home or business?

Ann Harrison-Barnes is the author of three books: A Journey of Faith: A Stepping Stones Mystery, Stories Outside the Box, and Maggie’s Gravy Train Adventure: An Electric Eclectic Book. She has also been published in several anthologies. Aside from her work as a Christian fiction author, Ann is a professional writer and she also crochets bookmarks and book covers to promote her books. To learn more about Ann and her work, visit her website at www.annwritesinspiration.com.

One thought on “The Practice of Burning Trash in Developing Countries”