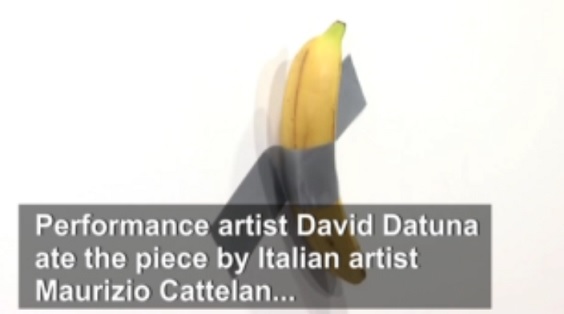 Can one eat art? Why not, especially if the art is edible and even yummy!

In college I took a philosophy class centered on the question ‘what qualifies as art’. Philosophical analysis makes literally anything an argument and it’s difficult to readily settle on a position. So that was the case of discussing art and what can be called a work of art. The recent news of a banana taped to a wall becoming an award-winning work of art brings back the memories of that class.

The story says two editions of this work were sold each at $120, 000. So one can actually eat such art, right. You’ll probably be surprised that a man in fact did eat it. A video clip of AFP on Dailymotion shows a man ate the original banana with which the art was created at the at the Art Basel fair in Miami Beach. So a replacement was found and the art was recreated.

There is one aspect however that a simple analytical question from my philosophy class would point out in this saga: did the man really eat the art? Or just the edible part? The art work was the banana taped to the wall so the whole scene of the banana plus the tape plus the wall made what was called the artwork. The man did not reportedly eat the tape and/or the wall—only the banana. But that banana alone wasn’t the art. So technically the man damaged the artwork by ripping a part of it—the part that was then replaced—but eat it all.

Art can be interesting when discussed. But part of it can be tasty in some cases. Just that not every tasty thing costs $120K and few who eat that item make headlines. Say you what?