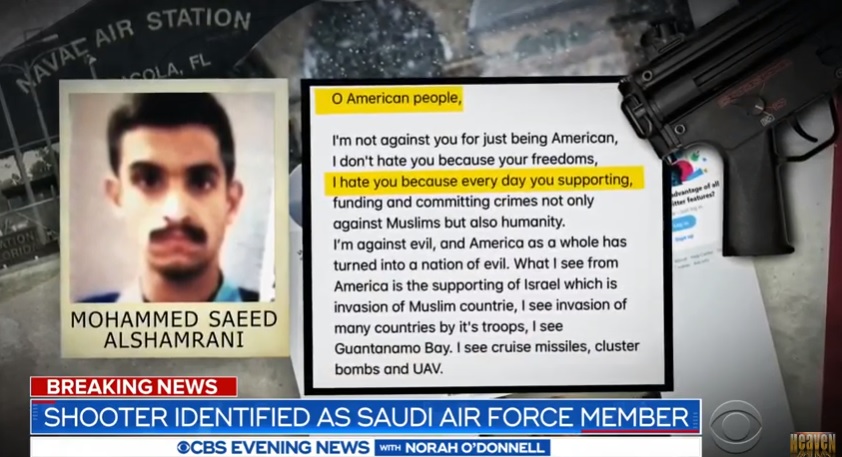 Once again America came under attack and, the culprit is a Saudi citizen, just like in 9/11. CBS News reported that FBI has started an investigation into the attack on the naval base and is focusing on the question whether it was a terrorist attack.

The culprit, named Mohammed Saeed Alshamrani, opened fire at the naval base staff in Pensacola’s Naval Aaviation Base, where he was under training. Alshamrani was a Saudi official being a member of the Saudi Royal Air Force. How he was able to get a handgun and carry it in a supposedly gun-free area is an important question and casts serious doubts over the impression of foolproof security at a sensitive area in the US.

CBS displayed an image of the culprit and what seems his Twitter timeline – but without displaying his Twitter handle (which itself raises some questions) – where a tweet expresses his hatred toward America and its “crimes against Muslims and humanity”. The post also expresses hatred toward Israel.

Meanwhile Washington Examiner reported that 6 other Saudi citizens were also detained after the attack that left 3 dead and 8 others injured. The story says that 3 of those detained for questioning were seen filming the attack. On the question of the nature of the attack as possible terrorism, the Examiner story wrote:

Officials are looking into whether to classify the shooting as an act of terrorism. Some lawmakers are already calling the gunman a terrorist.

Multiple cases of Saudi citizens studying or visiting the United States have previously made news for committing crimes and then escaping the country, some thought to have been facilitated in their escape by the Saudi government. Due to the close political and economic ties between the two countries, accountability for crimes by Saudi citizens in the United States is rare, if existing at all.