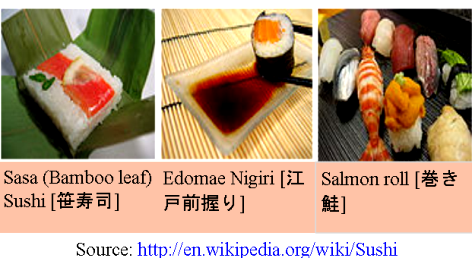 If I can live in Japan for 10 years, learn how to speak Japanese and learn a different culture and eat all the sushi I ate, I can do just about anything. ~ Tuffy Rhodes.

Are European or mixed cultural chefs qualified to take on the Japanese cuisine sushi and add it to their own cultural menus?

In Japan, sushi chefs train from ten to twenty years to become sushi masters, and there is a keen demand for their skills. 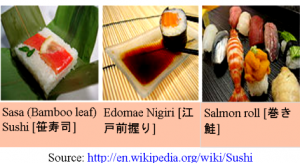 In the past, unless Japanese sushi restaurants were in a vibrant city, like London or Paris, I found it very difficult to find a skilled Japanese sushi chef. However, today, sushi bars are all the rage and can be seen everywhere. There can’t possibly be that many sushi master chefs to go around, so you may have to rely on word of mouth or look for long queues at the restaurant door to find good sushi.

Sushi presentations are purposely designed to be extremely eye-pleasing, and for those who fill the sushi bars, this Japanese delicacy offers a culinary delight that is difficult to describe to the uninitiated.

Upscale food enthusiasts and sophisticated travelers are on the rise, and they often eat out while on the prowl for new, interesting places to be entertained. As a retired restaurateur who loves Japanese food, my Japanese wife, Yumiko, and I haunt sushi bars and Japanese restaurants wherever our world travels take us.

In recent decades, Japanese food and sushi in particular, has experienced a surge in international popularity. Sushi bars/restaurants in Europe are on the increase. According to the Japanese government, there are now an estimated 20,000 plus sushi restaurants.

The secret to good sushi, apart from the quality of selected seafood, is shari rice. Shari is a blend of rice and rice and vinegar and finding the right balance is one of the key elements of sushi. Japanese rice vinegar is mild and sweet compared to more acidic Western vinegars which, for that very reason, are not appropriate substitutes for the preparation of shari.

Rice vinegar is added to cold cooked rice to make the shari that complements the sushi. Recipes for shari rice have been handed down for centuries. When served with raw fish, shari helps breaks down the fish proteins as a sort of pre-digestive process.

Blend all the ingredients and form rice balls. Place a pinch of shari rice, the size of a large chestnut, in the palm of one hand. With two forefingers from the other hand, give a light but firm squeeze. The magic is to maintain a firm, but loose consistency.

The taste of sushi greatly depends on the quality and freshness of the seafood combined with the shari. The chef will then select a piece of fresh fish that has been cut to form eye-pleasing shapes and place it delicately on top of the shari rice balls. Thus sushi and the texture of shari will vary, depending on the chef’s skilled hands.

When eating sushi, it is optional whether to use chop sticks or fingers. I prefer to use my fingers and with soya sauce and a dash of wasabi (a fiery hot Japanese radish paste). I place it in my mouth, close my eyes, and enjoy. My first experience was unforgettable. The shari rice balls left a slight vinegary, tingling sensation on my tongue, supplementing the cool fresh morsels of raw fish. I had foolishly slathered Wasabi paste onto my first bite of sushi. Tears welled up and rolled down my cheeks as the Wasabi backfired up my nose. Yumiko, my lovely wife, demurely hid her smile behind her hand at my initial reaction to the hot radish. However, once I learned to use smaller amounts, I came to look forward to the experience.

Sushi is recognized as an art in Japanese cuisine developed over centuries in spite of many political and social changes throughout Japan. However, in the modern era, significant changes have occurred including the introduction of Western culture.

Sushi developed naturally from the abundance of fresh fish that flourish in the archipelago of Japan. Commonly used fish are tuna, Japanese amberjack, yellowtail, snapper, mackerel, and salmon. The most valued part of the tuna is called toro, the fatty cut of the tuna fish. This comes in a variety of ōtoro (often from the blue fin species of tuna) and chūtoro, meaning middle toro, implying that it is halfway into the fattiness between (toro) and the regular cut. Aburi style refers to nigiri sushi where the fish is partially grilled (topside) and partially raw. Once eaten and enjoyed, the exquisite taste will remain a fond memory. Sendai, Kanto, and Shikoku are renowned areas in Japan where Blue fin Toro sushi can be experienced at its best.

Chefs around the world generally keep within their profound arts of cooking, but the competitive market for sushi has driven food chains to improvise, providing a consumer‘s market with cheaper alternatives. What price popularity?

Traditional sushi preparation requires highly specialized chefs, and as such, can be awfully expensive. Unfortunately, rapidly rising demand has outstripped the supply of qualified chefs. So how can we ensure that such a highly evolved art survives? Or will the global demand for this Japanese delicacy spawn a whole new, more affordable cuisine based on the original Japanese version, yet modified to fit the modern purse and palate?

Sidebar 1, How a professional sushi chef tests fish for freshness:

Sidebar 2, Vinegar and sake, (Japanese traditional wine) are both made from fermented rice. Thus foods and wine produced in the same cultural milieu naturally complement each other. Just as grape wines go well with European meals cuisines, so is heated sake or nihon-shu (rice wine) the best companion to Japanese dishes.

Author and retired entrepreneur, Victor Paul Scerri received the Norwegian Cultural Award for his efforts in restoring a 14th-Century wine cellar. He studied at the Medway Collage of Art, where he achieved second place in a prestigious, award-winning oil painting competition in Great Britain. His first works as a writer and artist were published by Recovering the Self: A Journal of Hope and Healing. In recognition of his art exhibits, one of his Zen paintings was chosen as the cover image for the April 2011 issue of the journal. Victor currently lives in Norway during the summer of June and July and the rest of the year in Spain. He continues to publish articles at EnzineArticles.com/, In addition he is an active team writer of short stories. You can follow his work via http://nicewriters.com.