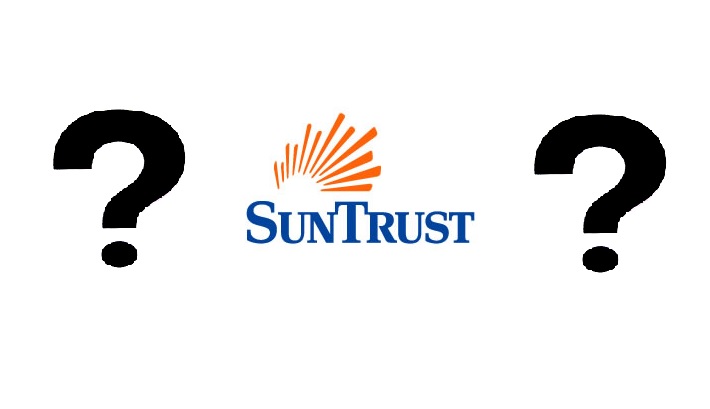 Last week, SunTrust Bank in Orlando Florida closed my checking account, hardly 5 days after opening it. I received a letter from their Nashville TN office that gave no reason for closing my account – at the same time receiving a MasterCard from the bank that had been ordered in my name the day they opened my account.

As I have an active Wells Fargo account where my employer can pay me via a check (while I was hoping for a direct deposit with a SunTrust account), it didn’t bother me much, except for the curiosity around why they would close my account almost immediately after opening it, causing a failed attempt on my employer’s behalf to pay me my first payment via direct deposit.

I am not the one to cry race or nationality or all that shit. But it was interesting to learn more about this bank (shouldn’t I be doing this before visiting them to open an account?). And quite a number of interesting stories about SunTrust’s history of problems popped up on Google.

A 2009 YouTube video by motivational speaker/educator Paul Davis tells the story of the bank’s shenanigans in the author’s own words as he shows a latter from SunTrust about how his account was closed and he was victimized by the bank. While this seems mostly a personal story, there are some where the bank came under fire for acting politically.

For example, last year, the bank received condemnation after it closed accounts of the conservative real-estate dealers Benham brothers who are said to be very vocal against abortion. The story pointed to the issue of discrimination by SunTrust targeting conservatives.

This year, the bank was in news again for closing the account of a Florida gun shop owner. Ammoland.com posted the bank’s letter to the shop’s owner who was left “shocked and outraged” by the bank’s move.

The comments on these stories, sharing their horror stories of SunTrust, are in addition to the few instances cited above. So this bank seems to have quite some history of pissing people with their crappy ways of business.

Looks like I have reason to be thankful and heave a sigh of relief for not having an account with them. Well, thank you SunTrust! My only question before saying farewell is: what keeps you from changing you name to “Mistrust Bank” or “Distrust Bank”?