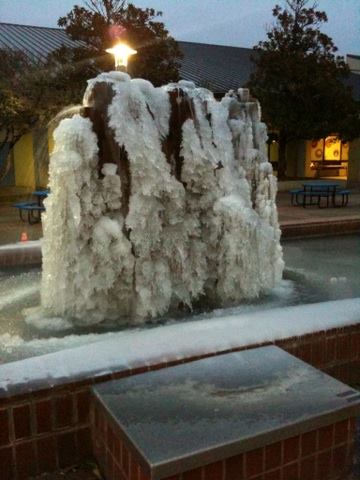 Northwest Oregon was hit by a snowstorm today and created a blanket of snow over the grounds by early evening.

From frozen pond surfaces to fountains of “cold wax” (photo at the Portland Community College), the weather started to move toward more snowy side with flakes hitting the ground around 10 in the morning in Portland. In the next couple of hours, snow got heavier with wind

The Seattle Times reports that one person was killed in Clark County as a result of accident involving at least 2 dozen vehicles stuck in the pile of snow. The paper called the snow storm “rare”. Cars were reportedly slipping and sliding in the snow in Portland the same afternoon.

Other reports informed that Corvallis received its share of the heavy snowfall and the Oregon State University (OSU) with its main campus in the city was closed for the day due to snowy weather.