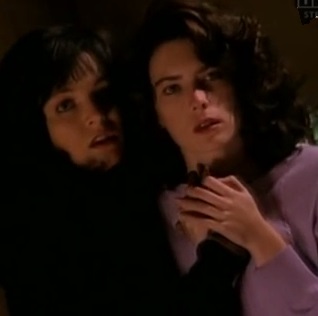 David Lynch’s masterpieceTwin Peaks remains a timeless classic for many fans, me included; and recently there has been some buzz on facebook from the show’s fans asking for a sequel of the show. The opening sequence of the pilot showing young Laura Palmer’s dead boy wrapped in plastic on the beach still haunts my memory – and the mystery deepened as an investigation was launched into the case in the small town where no one seems to be so innocent after all.

All Twin Peaks episodes had great endings. One that I have watched the most is of the second season episode “The Orchid’s Curse”. It is an episode with good action and great dialogue. This ending scene shows Donna (Laura’s best friend) and Maddy (Laura’s cousin) plotting to get Laura’s secret diary from the house of a young man, Harold Smith, who seemed to have had a close and mysterious connection with Laura. Donna leads Maddy in by signaling with a flashlight and keeps Harold’s attention to herself to let Maddy steal the diary. But does she?

The great popularity of Twin Peaks led to a prequel made as a feature film Fire Walk with Me (1992) where more was shown about the relationship between Harold and Laura and the events that led to Laura’s brutal murder.