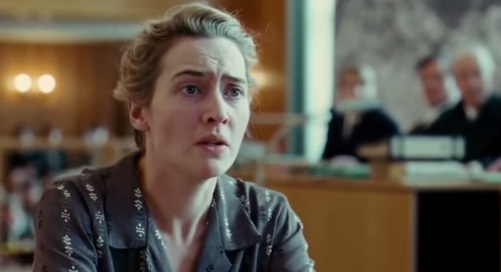 A young guy, who has had an affair with an older woman in the post WWII Germany, is shocked to see the same woman tried for the war crime of letting Jewish women die in a burning church. The young man, named Michael (played by David Kross) knows a secret that, if shared with the court, can counter the false confession of the woman, Hannah Schmitz and save her from life imprisonment. But, if he tells the secret, something of extreme personal value is compromised.

The Reader is one of those films that slowly but thoroughly engage their viewers, keeping them so until the very last minute. This scene marks the climax of the second/main act of the film when Hannah is being examined in the court and is asked to provide a sample of her writing. Challenged to reveal her most guarded secret, she falsely confesses to writing the report.

Kate Winslet as Hannah Schmitz won a very deserving Academy Award for Best Actress in a lead role in this drama film based on a German novel. This clip is one short glimpse into her acting prodigy.