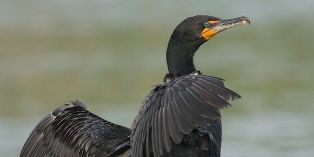 You’ll be surprised at how people come up with excuses to blame some innocent, harmless life forms to mask the real factors underlying a problem. A new example of such unreason is the planned cull of cormorant by U.S. Army Corps of Engineers along the Columbia River Estuary near Portland, Oregon.

Giusy Adragna’s petition on Care2 informs that the shooting of thousands of cormorants has been planned for next year accompanied by other means of killing the cormorant population of the area – all under the excuse that cormorants eat salmon and cause their population to decline. However, as the petition notes and as National Geographic confirms, the factors responsible for salmon decline are poaching, overfishing, and the dams on Columbia River.

There is no justification for the cormorant killing. It is simply a senseless plan against common sense and completely lacking any compassion or care for life.

The petition on Care2 has gathered the support of over 22 thousand people asking the Sondra Ruckwardt U.S. Army Corps of Engineers, Portland District, to give up the plan of killing the cormorants.

You may help stop this bloodshed of cormorants by signing the petition by August 4.