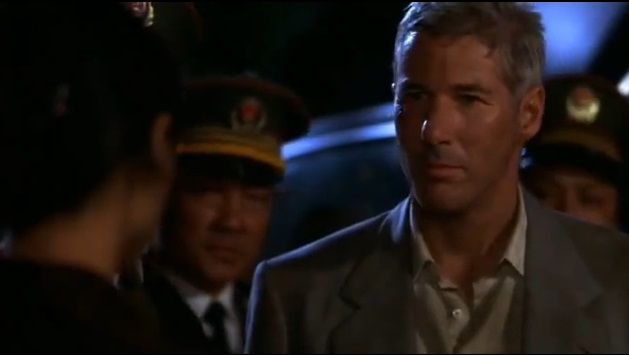 Jack Moore, an American businessman runs himself in serious trouble after having sex with a young Chinese girl, who is found murdered in the morning, and Jack is indicted for murder. Worse, the film happens to be the daughter of an

influential military general. With a court practically subordinate to the military, Jack faces imminent execution. The only shield between him and certain death is a young Chinese woman – his attorney Shen Yuelin, appointed by the state who would turn the tables on the conspirators.

Red Corner (1997) is a riveting thriller with a deep humanistic feel drawn from concerns of living in a dictatorial state where institutions not only rule humans but stifle humanity. Tight plot and stellar performances from Richard Gere as Jack Moore and Bai Ling as Shen Yuelin engage the viewers throughout the film.

My favorite scene is one showing Jack making it to the US embassy and relieved to be out of the death camp. But after learning that Yuelin had provided her personal guarantee as bail against his escape, Jack cannot stay inside the shelter while leaving Yuelin at the mercy of the enraged Chinese authorities.

Thanks to Narconomiconist for uploading the scene to YouTube.

One thought on “Scene Pick: ‘Red Corner’ – Jack Moore Steps Out to Save Yuelin”