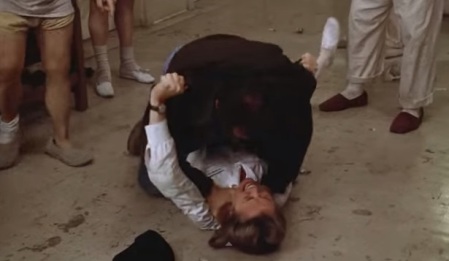 With all his screen magic, Jack Nicholson wasn’t among my favorite actors until I watched One Flew Over the Cuckoo’s Nest (1975). The film is a classic in all aspects – plot, theme, character, and performances. And Jack Nicholson is awesome!

The film stars Jack Nicholson as the jaunty Randle McMurphy, who invokes a new spirit of life among his fellow inmates at a mental health hospital in Oregon when he is admitted there for mental health evaluation. As the facility’ head nurse Mildred Ratched (Louise Fletcher) keeps order and control among the patients by regimen of medications and therapy sessions, McMurphy inspires them toward liberation by his ebullient and anti-authoritarian spirit.

This scene, close to the film’s ending, marks the climax of the film when one of the inmates commits suicide after getting a humiliating grounding from Ratched. I love the symbolism of McMurphy (humanity) attacking Ratched (authority/institution) right after she tells the inmates, “the best thing we can do is to go on with our daily routine.”

One Flew Over the Cuckoo’s Nest is a timeless film with stellar performances and the perfect setting to expose the abuse of psychiatry under the mask of treatment; broadly, it’s an epic of freedom versus slavery. Nicholson and Fletcher both won Academy Awards for best performance in lead roles, and of course undying critical acclaim as well.