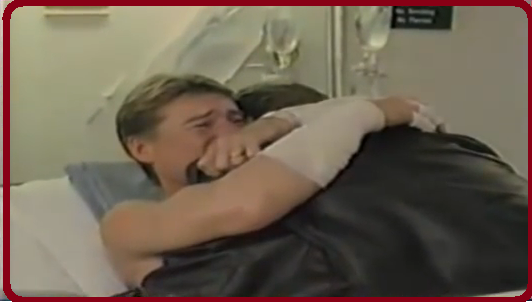 Jan Michael Vincent rocked and ruled the TV screen as Stringfellow Hawke in the popular CBS show Airwolf (1984 – 87). String, or Hawke, flew the super copter Airwolf on combat missions for the US government on the condition that they will look for his brother St. John who went MIA in Vietnam.

While Jan ran the show for 3 seasons as the lead, a fourth season finally replaced the entire cast and took mainly Canadian talent to add episodes to the Airwolf saga. Many were disappointed as the new arrivals appeared lackluster before the more established team: Jan Michael Vincent, Ernest Borgnine, Jean Bruce Scott, and Alex Cord. Yet, the show went on and many acclimated to the new show that had some good stories and probably more variety in plots than Jan’s Airwolf seasons.

This clip is a memorable moment from the show’s pilot episode, Blackjack, of the 4th season. The story shows a bomb blast in a Santini Air chopper that kills Dom (Ernest Borgnine) and leaves String wounded. In the hospital, he meets his long last brother St. John (Barry Vyn Dyke) who will take over as the pilot lead of Airwolf, assisted by Mike Rivers (Geraint Wyn Davies) and Dom’s niece Jo Santini (Michele Scarabelli).

This clip shows the moment the viewers of the show had waited for 3 seasons – seeing the Hawkes’ reunion. The background music by the way is touching – and it plays in many episodes of the fourth season, which kept Airwolf alive on- and off-screen.