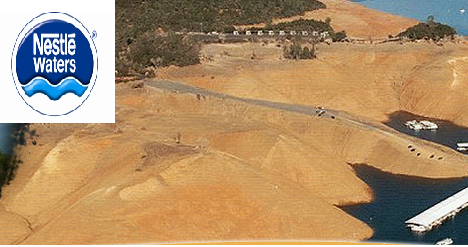 “Water doesn’t belong to corporations. It belongs to all of us.” This claim sounds so true and natural that it’s hard to believe why somebody would even need reminding us. Yet, the influence of businesses is terrifyingly large in our capitalist societies so much so that even basic necessities, like water, are becoming private property that is sold for profit by depriving people of their access to free, natural water.

A Care2 petition, signed by more than 30 thousand people, reminds us that California has only about a year of water reserves left. And that comes from NASA – whatever credibility it has if left to the readers to assess. But there is a general alarming call about California’s drought – which is quite natural since desert areas and their vicinities do see low precipitation and replenishment of water reservoirs. Add to it a big population, meaning more water consumption, and the problem can get serious.

“Arrowhead and Pure Life bottled water are Nestlé-owned brands. They’re draining 80 million gallons of water from Sacramento aquifers – and selling the water at a profit, even though they pay the same water rate as the California citizens who need that water.”

It’s interesting to note that the petition brings up the question of payment for water, comparing citizens and the corporation – which is but a group of people with a lot more money. So money buys the commons? Well, it makes every effort to, but it’s the headache of the common man to fight for the commons against the “special” that puts its corporate boots on the common land. Money can buy many things in our world. The commons is one thing it should not buy. California has the right to its water and the petition is asking Nestle to respect this right.