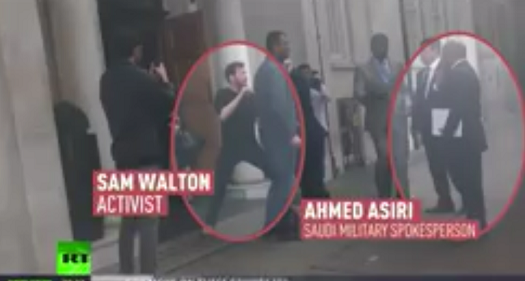 Britain’s government is openly accomplice in Saudi killings of Yemenis over the past 2 years. But one daring citizen stood up to a Saudi general visiting UK and tried to put the general under citizen’s arrest.

This past Thursday, Sam Walton, a peace activist advocating human rights and protesting Saudi atrocities in Yemen, intercepted a Saudi general named Ahmad al-Asiri who was visiting London. Calling Asiri a war criminal, Walton announced putting him under citizen’s arrest but the general’s guards came to his rescue and thwarted Walton.

As the general hastened indoor, an egg thrown at him from behind by some protester hit him on the back (see the video below). Middle East Eye wrote that the general arrived at the meeting “with egg stains on his suit.” Later, in the video footage, protesters are seen shouting “You are a terrorist” at the general as he comes out of the building.

The general was cited saying that he arrived a little late due to people who didn’t differentiate between protesting and attacking.

Interesting indeed to see a Saudi general complaining of people “attacking” him. And still heartening to see how caring and bold citizens like Walton exist I today’s world to stand up to the crimes against humanity.