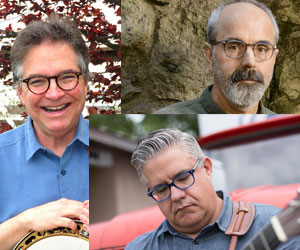 Three bluegrass headliners join forces on Thursday, April 6, 7:30 pm at the Palms Playhouse for a special show featuring Bill Evans on banjo, John Reischman (of John Reischman & The Jaybirds) on mandolin, Kenny Smith (of Lonesome River Band and Band of Ruhks) on guitar plus Nate Lee (of the Becky Buller Band) on fiddle, and Bay Area phenom Max Schwartz on bass and banjo.

Evans is well-known to California bluegrass fans for putting together outstanding shows and for his prowess on the banjo. Reischman is one of the premier mandolinists of his generation and capable of swinging between re-inventions of traditional old-time tunes and compelling originals, many of which have become standards. Kenny Smith is two-time IBMA Guitar Player of the Year and is widely considered one of the most important and influential flat-picking guitarists of today.

Tickets for this not-to-be-missed event are $22.