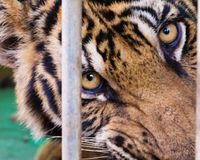 April 30 – a legislation that means to end the use of exotic/wild animals in travelling circuses. This proposed law will relieve these animals of the abuse they have to suffer in circuses. The Kingwood Observer reported that Animal Defenders International (ADI) is collaborating with Moran and Congress members on details related to the status of animals in circuses.

To support Moran’s initiative toward liberation of animals from travelling circuses, a petition on Care2 is addressed to the Congress asking for putting an end to the sufferings of the captive animals at circuses by passing the bill introduced by Jim Moran.

“It’s no secret that wild animals in circuses are suffering immense physical and emotional pain. Finally, we have a chance to stop this abuse on a national level,” reads an email notification about the petition which has been signed by more than 17,000 supporters. The petition still needs about 700 signatures to reach its target of 18K names.