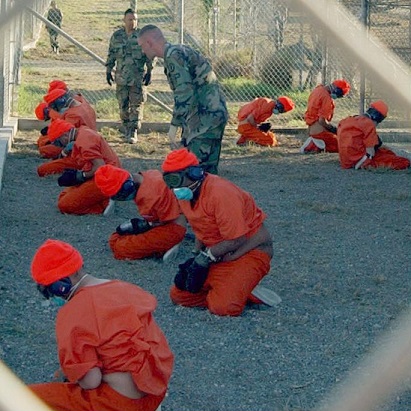 Guantanamo Bay detention camp is a U.S. military prison located in a Naval Base in Cuba. It became news when it first opened back in 2002 as a place to imprison terrorists and foreign fighters in both the Afghanistan and Iraq wars. During that time it has seen a peak of prisoners from 783 (in 2002) to now, 91 total. The prison cost to operate the facility each year as of 2015 is estimated at around $455 million.

President Obama has promised to close the prison since he first took office, mostly due to the legal aspects involved in having such a prison remain opened. Each prisoner was charged with being an “unlawful combatant”. “An unlawful combatant is a person taking part in belligerent acts against a state, while not being part of a regular military force or subsidiary militias.” This is a little different from an “enemy combatant” where the criteria must have four particular characteristics. First, they must be commanded by a person responsible for his subordinates. Second, the person must have a fixed distinctive sign that is recognizable from a distance. Third, they carry arms openly. Fourth, they conduct their operations in accordance with the laws and customs of war.

At the present political climate, it is not likely that Guantanamo Bay with be closed any time soon. Meanwhile, privacy rights and tracking terrorists have become more the forefront; the latest attacks in Belgium have raised many issues of how the intelligence failures of several European countries have occurred, causing authorities again to call for quicker and more efficient intelligence cooperation. Perhaps causing privacy rights advocates to question just how far is too far.

Author Thomas Hobbes, in “Leviathan” once wrote, “I put for a general inclination of mankind, a perpetual and restless desire of power after power that ceases only in death. Man gives indifferent names to one and the same thing from the difference of their own passions; as they that approve a private opinion call it opinion; but they that dislike it, heresy: and yet heresy signifies no more than opinion.”