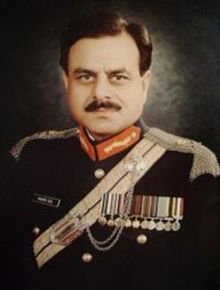 Death brings feelings of bereavement and grief for many, at least sorrow for most or all who have known someone. But if the history of the deceased is stained with crime and bloodshed of others, his/her death may come as relief or even a moment of condemnation. This seems to be the case of the late General Hameed Gul.

Gul, who was the chief of Pakistan’s powerful intelligence agency ISI for a couple of years, recently died of brain hemorrhage. Since then, he is being remembered as a spymaster who supported militants, playing for cash in the hands of the US and Saudi Arabia to strengthen anti-USSR militancy in Afghanistan. These militants would later become Taliban – the most feared terrorists in both Afghanistan and Pakistan.

On social media, many people are posting about Gul, calling him a killer of Pakhtoons, a murderer, and so on. One title he has earned posthumously on both news and social media is the “Father of Taliban”.

Hameed Gul’s case is a reinforcement of the conviction that you need to earn your respect; he is one man who had power and used it to his advantage at the cost of public’s safety and peace. And he left a bad name among many – some wishing him hell instead of blessing. His “legacy” lives in form of killings and oppression of civilians by militants.