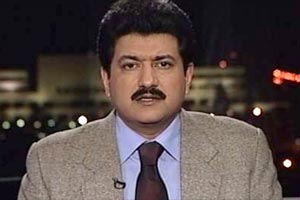 One of Pakistan’s most famous journalists and TV anchor Hamid Mir has held Pakistan’s intelligence agency ISI as responsible for the attempt on his life last week.

Mir was shot six times on April 19 in Karachi while he was leaving the airport for the office of Geo News, the popular TV channel where Mir worked as an anchor and editor. He was rushed to the hospital for emergency surgical treatment and is said to be out of danger now. As his condition stabilizes, the attack on his life is making headlines around the world.

The Guardian reports that Mir has issued a statement in which he held Pakistan’s prime intelligence agency, ISI, responsible for the shooting. Prior to the attack, Mir had already issued a statement saying that he had information of a plan by the ISI to assassinate him, as was learnt from Mir’s brother Aamir Mir.

Mir had been vocal against the role of Pakistan’s army and intelligence in the atrocities committed in Balochistan and the military’s control of the country. On the other hand, Pakistan’s defense ministry has demanded closure of Geo TV for its coverage of the attack on Mir and his statements against the intelligence.

Another vocal critic of government’s corruption, Pakistan’s well-known TV anchor Mubashir Luqman received a threatening message that read “watch your back” on his live show on ARY News when he ran footage of Punjab government’s harassing raids on poor civilians and beating them inside their houses. On receiving the message, Luqman is shown defiantly addressing Punjab’s chief minister Shahbaz Sharif and saying he is not afraid of the state-sponsored terrorism and is right there in Lahore city.