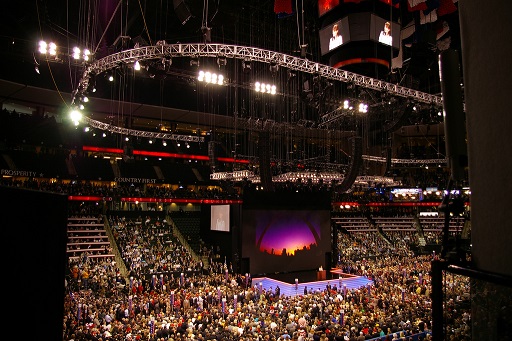 If you are like most informed people, I have no doubt that you have kept up with the political campaigns that center around this election. Most notably, this election has been dominated by the outsiders, specifically, a business tycoon from New York City named Donald Trump.

What makes Donald Trump so popular?

He speaks to, and for, the disaffected masses, the “silent majority” who feel that they no longer have a voice in their government.

The concerns of this majority are varied, they traverse a broad spectrum of issues. Many are concerned about illegal immigration; they feel that they are misrepresented because the immigrants are taking their place in society as well as their jobs.

When we add the decline of the military, the bad economy, and terrorism to the list, one can see why so many Americans are disaffected.

Unfortunately, the negative attacks that are part and parcel of the debates turn voters away from the ballot box. The average American expects the candidates to focus on solutions, not rhetoric and attack dog style politics. We, the members of the silent majority, want solutions please.

What will our next president do about the following issues?

Putting more jobs on American soil, shoring up the backbone of the middle class, curtailing the power of major corporations, our broken health care system, and last but not least, revamping our military in order that they have the latest weapons and the training, should the need arise for it.

The Republicans were swept in to office in 2014 precisely due to the fact that the people who voted for them felt let down by the Democratic leadership. What were the top concerns? Obamacare, illegal immigration, and the Islamic State.

I remember all too well what those days were like. I was in the Ector County hospital in rehab, recovering from an auto pedestrian accident. The news was my connection to the outside world. At that time, the refugee children were pouring across our southern borders in droves. They were largely from Central American nations, they were sent here by their parents to escape gang violence at home. Let us not forget, these children are the grandchildren of the people who experienced violence firsthand in the eighties as a result of civil war between Marxist rebels and right-wing government troops. This presents a catch 22; we can take them in, yet their plight tugs at your heartstrings.

Then there was the Islamic State, a group who wants to take the world back to the seventh century under Muslim domination. These people are the most brutal people to emerge since the Second World War. And they are taking advantage of the net in order to enhance recruitment and advertise their brutality.

I don’t see how Bakhar AlBaghdadi’s life can be happy; Kayla Mueller’s family’s isn’t. Kayla was a girl who went on a humanitarian mission to help the children of Syria; she was captured by Isis, and turned over to Baghdadi. Her death was confirmed in January of 2015. If it had been me, all military resources would be in force to fight Isis, I would go so far as to reinstitute the draft if I thought it was necessary. And Americans would have jobs working in the defense plants in order to provide our fighting men and women with the latest technology to keep that operation going until there was no doubt that the Islamic State was yesterday’s nightmare, and that we were their worst nightmare ever.

No one wants war; war is the worst thing we do to each other as human beings. Yet some wars are necessary; these people declared war on us when they broadcasted their first beheading of an American Hostage on YouTube.

Last but not least, I have been around nurses and other health care professionals enough   to understand firsthand that the Affordable Health Care Act is worse than what we had before. Yes, our health care system was broken before Barack Obama took over, but it is in worse shape than it has ever been. The nurses and other health care professionals have told me that they can’t do their jobs the way they see fit because of Obamacare, and when they try to advocate for the patient, that hurts.

These are the issues that drive people in to the arms of a Donald Trump. Personally, I like Ted Cruz or Ben Carson. For one thing, I don’t believe that building a wall across the border will help. That reminds me of the Berlin wall. What about you; how do you feel?

There are those who will go so far as to advocate for the violent overthrow of our government. Why should we go that far?

Does anybody remember the Magna Carta? This was a document that forced the king of England to institute common law. After all, isn’t common law what our constitution is based on? I thought so, but if I am wrong, I stand corrected.

There is no need for violence; but we need a new Magna Carta for America.

Let the silent majority speak, loud and clear. We want the constitution put back in place the way our forefathers intended. Anyone who wishes to immigrate to this country must learn to speak, read, and write English. They must agree to get jobs and pay their own way as they go, pay their taxes, obey the laws, and serve their country if called upon to do so. Otherwise, they are not welcome until they do.

The military needs to be rebuilt from the ground up. Remember Reagan’s Peace through strength policy. Let us have the strongest, best equipped, and best trained military on earth, and then pray to whatever God or higher power that we believe in that we never have to use it.

Welfare needs to be cut out. If a person is not trained in a skilled job, put them to work picking up trash or rebuilding the infrastructure. Let the farmers have their land back, and let them grow their crops. Stop buying oil from foreign countries and supporting terrorism in the process. Invest in renewable energy.

Repeal Obamacare; let the nurses and others do their jobs providing the best care for the patients and their families. Hire the disabled, provide jobs and homes for the homeless, and treat our veterans who have given so much with the respect they deserve.

As a nation, we can do better. Our best days could be ahead, if we as individuals determine to make it happen. It starts with us; we start where we are, and we do what we can. Quit depending on Big Brother to do it all. There is so much we can do for ourselves, but we must accept the responsibility. By accepting that responsibility and then taking the initiative, we can surpass what we once had. Are we, as individuals who make up this nation, up to the task?

These are only a few of the things I have thought about since I was first hospitalized in June of 2014. My friends and I talk about this stuff every night on the chat lines for the blind, now I hope to share this with a wider audience. Remember, your voice counts, and one voice can make a difference. Thanks for your time.