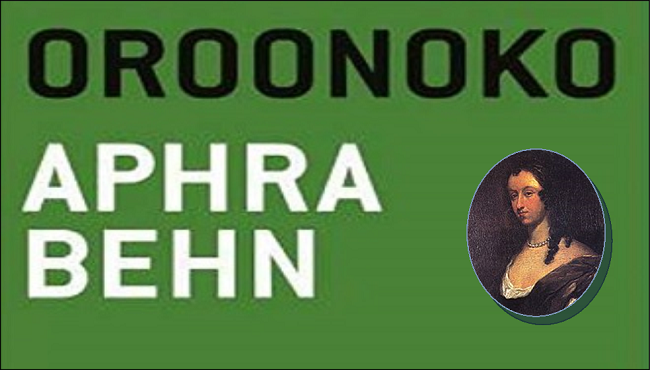 Reading Oroonoko is what in the literary sphere one might regard as receiving an invitation to debate. Whether you take the content or the form, it’s a bit challenging to place it effortlessly and under a single, befitting label.

First published in 1688 (William Canning, London), Oroonoko is regarded as one of the first English novels, and almost certainly the first anti-slavery novel—provided we agree on it being a novel as against novella (or long story). As the complete title “Oroonoko, Or The Royal Slave” conveys, the book tells the story of an African prince, Oroonoko, who is tricked and captured by English colonists, then sold in slavery and kept at a plantation in Britian. Unlike Mrs. Stowe’s aging Uncle Tom though, Oroonoko is a young warrior whose princely spirit remains untamed until the end. His story has great passion, romance, and action—elements that characterized the royal male heroes of those times.

In a significant detail in characterization, Oroonoko doesn’t quite fall in line with subsequent slavery-themed works such as Uncle Tom’s Cabin or, more recently, Hayley’s Roots. Aphra Behn takes a royal slave as her protagonist—a prince who once enjoyed power over others in his native land before his fate fails him to the captivity of white colonists. This turn of fate is similar to the Shakespearean tragedies that are rich in themes of betrayal and doom. What makes Oroonoko’s character less eligible to sit well with subscribers of modern anti-slavery literature is his princely practice of keeping slaves himself. He is shown to offer his slaves to Imoinda, the deceased general’s daughter who becomes the love of his life.

This isn’t the case of Oroonoko’s character only but also of his native land’s royalty that kept and traded slaves. And this perspective is further muddied for the anti-colonial, or in more contemporary spirit of activism, the anti-English critics, by the victimization of Imoinda at the hands of the African king (Oroonoko’s grandfather). Oroonoko is thus shown a victim, as is Imoinda, first in his native land, his home, at the hands of his own people before he is chained on the plantation.

Oroonoko slams slavery, and particularly the slave trade of the English, not so much by Prince Oroonoko’s suffering as by the narrator’s description of the characters, mainly of the English captors. Behn doesn’t hold back from using adjectives, and generously so, to rebuke the villains while sparing those of good character among them. The freedom to voice the author’s sentiments in the story via first person narration becomes prominent here.

With its merits, Oroonoko suffers from its air of exaggeration in phrasing—again reminiscent of Shakespearean storytelling—be it the depiction of Prince Oroonoko’s courage and strength, Imoinda’s beauty and loyalty, or the villainy of the slave-hunters. But one could probably accommodate this, given the frequent use of hyperbole and poetic style of phrasing in literary language of the time. Still, parts of the story would pass as rough, gory, and graphic—an aspect to turn off animal-advocate audiences.

On the whole, this reviewer would call Aphra Behn’s Oroonoko an anti-colonial novella about slavery and bravery. Whether or not it fits well in a shelf under a single label, it has secured a unique place in literary history and remains a recommended read for English literature lovers.