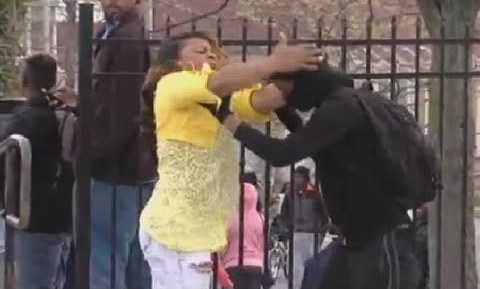 It’s less than 50 seconds and the video has become a social media sensation and made headlines across the nation with about 8 millions views in just 3 days so far. We see an angry mom of African-American ethnicity beating her teenage son who is about to throw rocks at the police in Baltimore. The video has become a sensation and the mom a celebrity, but opinions about whether she sets a good example of a parent seem to vary radically.

There are those who are hailing the woman’s act of beating her son publicly to teach him a lesson on remaining peaceful and law-abiding amidst all the madness exploding in form of riots. And then there are others who see her behavior an example of bad parenting for she is exhibiting violence herself which goes counter to her intended peace-teaching.

ABC News later spoke with the mom, named Toya Graham, already being called “the mother of the year” and her son Michael who had not listened to his mother’s advice not to take part in riots. The ABC story says people are offering to help Graham – who recently lost her job – thousands of dollars for being an example of a responsible parent.

But how is Toya’s way of keeping her son on the track not a good example of good parenting or teaching peace? I’ll let Dave Scotese here to offer his take on this point.

You know what I think about punishment. Coercion of any kind. Stopping someone from being violent is great. Using violence to do it is idiotic. If you “KNOW” that you can accomplish something only by using violence, then you ought not to stop it, unless you are acting in self-defense. Generally such knowledge is fake, and the person Knowing it is lying to himself.

There is no time for analysis when you have a gun pointed at you. Physical force is warranted. It is “violence” (in a shallow meaning) that you should use, but you aren’t violating anyone. An aggressor has no rights. Aggression is the only way to alienate your rights.

Now let’s get to the case of this kid in the protest. The kid is violating the police. Simple as that. So what can the mother do to stop her? The mother can stand in front of her child who holds a brick. She needn’t scold or hit. In fact, scolding and hitting violate him. She is now an aggressor.

The most efficient and effective way to alter someone else’s behavior is to reach their capacity to use reason. Do you think harsh words and yelling can do that? If so, then that is recommended. I think soft words and empathy work better. If you are a boy’s mother, your attempt to get in front of him by itself will stop him from throwing rocks. Once your attempt is successful, you can close the gap to the point where you can embrace and/or speak softly to him: “The police can kill you, and I don’t want that to happen. Let’s not be like them, ok?”

On beating a child, I say beating your child for ANY reason is counterproductive. Some parents would think it’s too late to teach a child manners. Well, “too late” isn’t a yes or no question. The older a person gets, the harder it is to help them see the light unless they are already working on it. But, strictly speaking, it’s only too late when the subject had died.

Dave Scotese is a software consultant, writer, founder of the literary community Litmocracy, and the webmaster for http://www.voluntaryist.com.