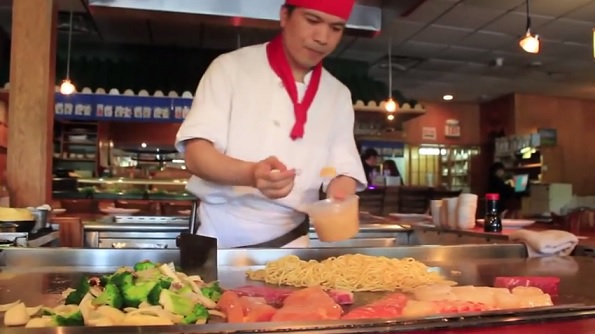 On March 17, 2016, my mother and I, along with some of the ladies from our church had a fun and tasty dining experience at Hibachi Grill, located behind the Krystal Restaurant in Cordele Georgia. This outing was an experience I will never forget.

First of all, when we arrived, we asked to be seated near the front of the restaurant, so everyone could watch the chef cook our meals. Let me tell you, being blind took very little away from the cooking show the chef put on for us. But before I describe the entertaining meal preparation from my personal observations and what was described to me, let me tell you a bit about the food that was brought out to me.

I ordered a seafood salad, the shrimp egg rolls, and a side of steamed noodles, and sweet tea to drink. The salad was brought out to me on a square platter, with two slices of an orange and a bit of cheese on the side. However, most of the salad was inside the bottom half of an orange peel, with some kind of leaf as a garnish. I can’t tell you everything that was in the salad, but they used an orange dressing that was definitely different from what I usually eat on a salad. The egg rolls arrived in a rectangular container, with a section that had a sweet sauce. Instead of the stuffing being wrapped in some sort of wanton wrap, like Chinese restaurants do, this was fried in a batter that was crispy on the outside, soft and delicious on the inside. All this food arrived while the chef was cooking our meat and sides on the grill.

Now, I’ll describe the chef’s art of cooking. When the cook put oil on the grill and fired it up, we had to sit back away from the table for a few seconds, because if we didn’t, our eyebrows and hair might get singed. The first blast of heat whooshes out from the grill and covers your table and can even be felt a few tables away. Once the grill is fired up, you’re fine.

I then heard the clanking of medal spatulas, so I asked my mom what was going on. I was told that the chef was juggling an egg between the spatulas to crack it open. My mother said that he even put the egg in his hat, then caught it on his spatula as he tipped it back out. After cracking the egg, he fried the rice for those who ordered it. He did a few other tricks that I can’t describe, but the way he seasoned our food, was an art form all its own. As we were seated, I first heard a jingling sound, like someone was rapidly ringing a hand bell. I found out that the chef takes his spatulas and shakes the salt onto the food as he is preparing it. The spatula clanking against the salt shaker, is what made the jingling sound. One final note about the cooking entertainment, once your order is prepared, the chef scoops it up onto his large spatula, you lift your plate, and he serves it up, nice and hot. This isn’t the same as the experience I described, but here’s a video that will give you some idea of what I’m talking about.

If you ever plan to dine at Hibachi Grill in your neck of the woods, after dinner, I highly recommend that you try the fried ice cream for desert. This was a Birthday treat to myself, and it was nothing like the first time I tasted it. The chefs in the kitchens, fry up the dough first, then they put a scoop of vanilla ice cream down in the dough, put it back down in the hot grease just long enough to form the dough around the ice cream, then serve it up in a desert bowl. You might think that the ice cream would be melted when you got it, but that is not the case. Once they drop the ice cream in the dough, they put it in the hot pan for less than a minute, so the ice cream stays frozen.

Please share your Hibachi Grill adventure in the comments below.