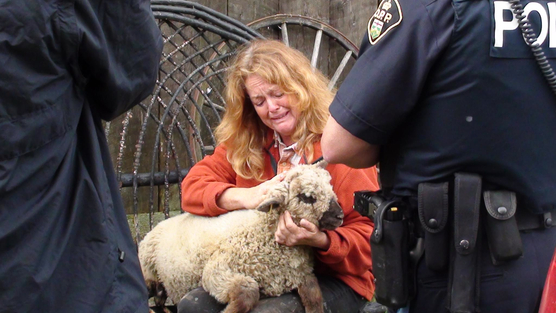 The Canadian Food Inspection Agency (CFIA) has been terrorizing a woman farmer who chose to breed the rare Shropshire sheep on her farm. Under the suspicion of infection with scrapie, a fatal kind of encephalopathy affecting sheep and goats, but not transmissible to humans, CFIA killed 70 healthy sheep of Jones’s farm despite the fact that none of them tested positive for the infection.

Worse, Jones has been dragged to the court on criminal charges of conspiracy, breach of quarantine, and disobeying a regulatory order, as reported in the story on Health Impact News Daily. She suffers from traumatic stress and depression on account of the invasion of her land and sheep in addition to the intimidating authorities who mean to break her spirit of love for nature and life.

Jones’s petition Why does Ag Minister Ritz support CFIA killing Canada’s rare heritage livestock? on Change.org further explores and exposes the self-interested, dictatorial agendas of government officials who are wearing masks of democracy and yet continue to sabotage public good and environmental and ecological safety.
The case of Montana Jones stands as another example of a sane individual standing against an insane, corrupt authority that is state-sponsored and that means to destroy the good work people do to improve their lives and the life around them. The motives of Canadian authorities are crystal-clear: enslaving people who want to remain independent and making an example of them to scare others from living free.

Please sign the petition and stand by Montana Jones to save the world from more slavery masked as democracy.