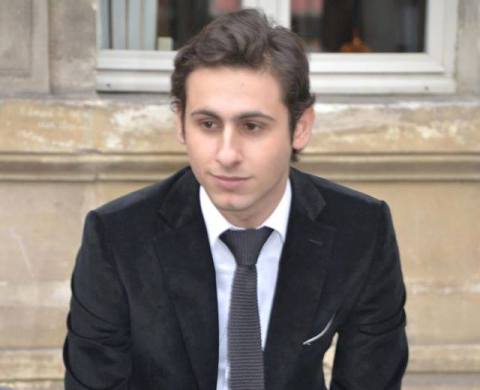 Sometimes people fall into positions that are driven by the hand of fate. They are positioned as a manifestation of divine care or direction. Today we are here to learn more about a young man who has taken a stand for what he believes in and still lives for today. He is a man who has directed himself to be a source of comport to those who need to see change in their current cultural conditions. This gentleman is known for his political goals and described as patient, ambitious and persistence; deemed as a tool of divine intervention. We are indeed pleased for this interview with Maxime Verner.

Michell: Please tell us a bit about your up brining.

Maxime Verner: My name is Maxime Verner and I am 24 years old from France. I studied at the Celsa, the Communication School of Sorbonne’s University. My job consists of helping entrepreneurs to create projects that change society for the better. I am from a little town called Bron, near Lyon, in the southern region of France. I studied at Université la Sorbonne, which is a renowned university situated in Paris. Today I still reside in Paris.   I am grateful to have had the opportunity to grow up in France  because this country makes it possible for anyone, whether born in a poor or rich environment, as long as an individual is ambitious and curious, to be empowered with liberty to succeed and make changes to improve the society we live in; even if it involves taking delicate initiatives. Everyone has the opportunity to fight for what he or she feels is right and to speak his or her mind out loud for more liberty, equality and fraternity, which is what we would consider brotherhood.  Freedom of speech in France is something incredibly important in my eyes and one of the reasons I am feeling extremely fortunate and thankful that I grew up in this country.

Michell: You ran for president of France in 2012 and you were 22 years old at the time. Please tell us what that was like?

Maxime Verner: It was a great experience. I met a lot of people involved or unmotivated, but they were always open minded and friendly. I think that youth should be taken into account more often in political and legislative decision making. Youth here is a concept that has within it different social layers and that social disparity and inequality within young people is the main reason for ideological divergences rather than the age factor. During the campaign, many young people have asked me for advice because they were feeling unappreciated and depreciated. My goal was to give them a voice and create wider awareness to the forgotten youth. I specifically worked on targeting the driving license issues. Driving licenses are extremely expensive in a lot of European countries, including France; they can be anywhere between 1000 and 1500 euros which means almost 2000 US dollars, regardless of your financial situation or age. A lot of young people do not have the financial means to have a driving license, and it is unfair to them. Moreover, many jobs require having a driving license, which creates indirectly some sort of discrimination against people needing a job the most. Mobility is necessary for work and leisure. The French government calls itself the Government of the French Republic. They consider themselves to be democratic, social republic and secular but indivisible. It is divided between executive, judicial and legislative branches.

Michell: Why did you feel you needed to run for president? What were some of the issues that you felt needed to be addressed?

Maxime Verner: The first quality is listening for me; engaging in politics is knowing how to transcribe what “ressentir” (A French verb basically means to feel, to think, or to experience). The majority transcribes what the majority feels and thinks. The Presidential election for me was a medium to take young people into consideration and act towards finding solutions for them.  I influenced some of these young people and insisted that policies be made to help the French youth. I realized that sadly enough the young people in France were involved less in society and its politics. That’s why I am committed to launch a new impetus.

Michell: What is your position today? What sort of things are you doing today to continue with your cause?

Maxime Verner: I respectfully remain President of the Association “French Youth” and I continue to exprim (In French it means to express yourself, to tell out loud) and examine myself the issues that affect the youth in France. I also have created Forwards, a media about prospective on technology or sociology.

Michell: One of the major issues you had striven to create change for were the young adults in France that have been affected by homelessness. Have you ever considered collaborating with organizations internationally to generate funding to solve some of the housing issues? There are some amazing funding opportunities through Charity Cruise’s associated with the travel industries, American Foundations and much more.

Maxime Verner: The precarity (précarité in French has the same etymological origins as precariousness, however, whereas in English the meaning of precariousness focuses on insecurity and instability, in French précarité means lack of financial means , instable situation due to poverty the emphasis is put on the lack of money; the instability and or insecurity of it.) This is a very important thing in France. I grew up in poor family and I am currently working with organizations to fight exclusion, discrimination or social exclusion and poverty. Thank you for introducing me to these organizations; I would love to work with these organizations in the near future.

Michell: Today it seems less and less young people are involved with politics and maybe losing interest in it. Why do you feel it is so important for young people to get politically involved from an early age?

Maxime Verner: Because the young people are what will take the next generation where it needs to go. It is the ability of today’s youngsters to convince politicians to make right decisions for them that will seal their chances of succeeding in the future; no one else can help French youth to create a brighter future for their generation unless they speak out for themselves. New communication tools such as different levels of media, social networks and the internet help new generations to influence other citizens to change the society.

Michell: Can you please share with us a bit about “Hesychia”?

Maxime Verner: Hesychia is a communication agency. We work to create a specific image of a given brand. We want to give back identity and value with fancy creations that work.

Michell: We know that when it comes to politics and problems it can bring a strain on our perspective at times. Can you share some of the great things that France does for its citizens?

Maxime Verner: I am convinced that the Parliament should vote in favor of the eligibility for all citizens to vote at the age of 15 and that the age of 23 be the age at which one could consider running for President. In France you can purchase a pack of cigarette at age 16 but you cannot drive or drink alcohol until you are 18. I mean if you are mature enough to vote in France, then you should be considered mature enough to run for an office. I also worked towards convincing Nicolas Sarkozy and Francois Hollande to reform the access to holding a driving license for example.

Michell: Please share with our viewers some of your long-term goals.

Maxime Verner: To change this society and give it opportunities for people to improve the lives of others. I think service and mutual aid is the real power and to care about others is the value revealed virtue of the XXIst century. I think our century will be altruistic or not.

Michell: What is the best advice you could give to anyone who is considering a position in the political realm of France?

Maxime Verner: The independence and freedom of speech are the most important things today in politics.

This reporter found Maxim’s point of view particularly exciting, the kind to share with others to make us think of what the best of human nature can conceive.