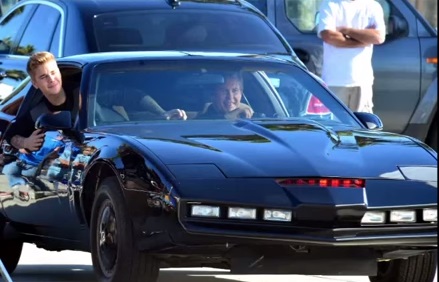 Michael Knight and Kitt had a guest last month – pop star Justin Bieber.  Bieber is said to be teaming up with the TV icon of the ’80s for an upcoming video project as reported the UK-based Daily Mail.

The two celebs drove in Kitt in Venice, California. Not quite unexpectedly, as Entertainment Tonight noted, Hoff was in the driver’s seat and Bieber was the passenger.

The video also showed Hasselhoff in his popular Baywatch suit while Bieber was spotted skateboarding. The most memorable scene, still, was the two stars seated side-by-side in Kitt – a hint that even today’s young pop icons can’t resist a ride in the coolest car ever made.