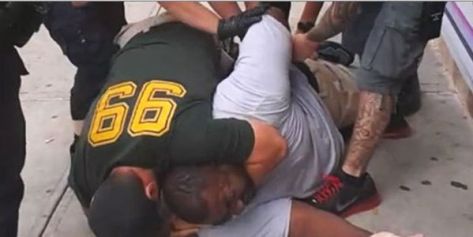 The United States is seeing a chain of events involving killing of civilians by cops and the judicial system failing to punish the police officials. The result is protests against the lack of justice and accountability.

Since the brutal killing of Thomas Kelly by police in California in 2011, quite a fe

w cases of police shooting civilians have made news across and outside the US, leading to public protests. The most widely reported of these protests started this year with the killing of Michael Brown in Ferguson, MO, followed by the more recent one of Eric Garner in New York.

In yet another case, reported yesterday, an unarmed back man – a father of four kids – was reportedly shot dead by a police officer in Phoenix, AZ. The story names the victim as 34-year-old Rumain Brisbon who was shot by an officer on Tuesday night. Protests were held in front of Pheonix police headquarters after the police department reportedly justified the officer’s act of shooting Brisbon.

Meanwhile, a Care2 petition calls on NYPD to fire the officer who killed Eric Garner in a choke hold – something which the petition page says was declared illegal two decades ago. The petition has been signed by more than 30 thousand people and it points to the repeated incidence of shady judicial verdicts ending in a stronger impression of racism and police brutality.