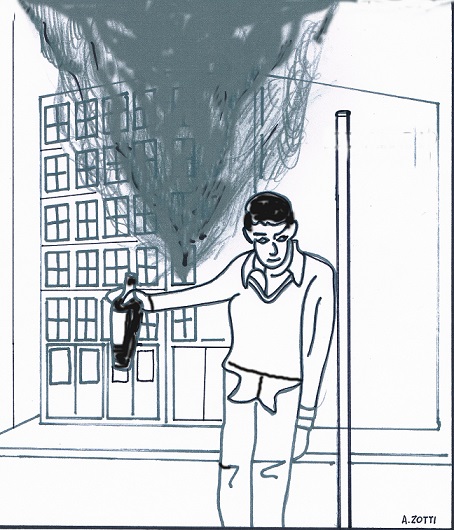 Surprising as the fire department’s investigation was, Blair Norse could never have thought of how the arson incident that made headlines countrywide just two days ago would relate to him on such a personal level. He certainly wasn’t responsible for the fire as such, one that burnt down nearly one third of his workplace and cost about 2 million dollars worth of property damage; yet, after seeing the report, he felt he could have prevented the incident had he only made one small choice before leaving home that night. 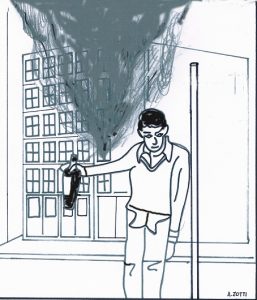 No one in the workplace, let alone his boss, knew that Blair’s wife had left him and the only consolation he found was in alcohol. He told himself he only needed a little alcohol to “take the edge off”, and that it was all harmless. Unfortunately, a little bit turned into more and more as the weeks went on. When Blair went to work that night, he was feeling a little ill and had a severe headache. He did not expect to fall asleep in the breakroom, smoking a cigarette. The last thing he remembered was sitting down, then being woken up to a room full of smoke. He heard other employees screaming in the distance and then someone grabbed his arm and dragged him outside where he passed out on the grass.

Blair gazed at the burst of flames gashing out of windows that curled up to the roof of the three-floor building. Firefighters did their best to save as much as they could. However, as to the extent of the damage, it would take days. Driving home that evening, his mind was a cross between the fire and his wife, who left him after twenty-five years of marriage, without so much as a note. Two days later, reading the headline “Office Fire – Nature of Cause to be Determined”, he reminisced his movements on the day of the fire. He remembered parking his car and getting out pattering his pockets, looking for his cell phone left on the kitchen table. Once inside of his office, he immediately went to his filing cabinet, looking for his vodka stuffed between archives. The office phone rang. Picking up the phone he heard a click as it went dead! He sat massaging his head, feeling bad, and in need of a cigarette. Looking at his wife’s photo on his oak desk, he turned it face down before making his way to the rest room. He didn’t hear the smoke alarm, but luckily, he was dragged out by a colleague.

His cell phone had been there on the kitchen table with a gibberish text message from an unknown number, and he had forgotten about the message until he saw the same message in the final investigation report. He remembered leaving the phone on the table while he pondered how to reply. Instead of replying, he ate the dinner that served as his breakfast, and left without the phone. He had wondered if “Ignis non mutat veritem” had any meaning at all.

When he learned that the same words were found in the investigation of the fire, he decided they must mean something, and he wondered if the sender of the text would explain it. Should he ask or should he tell the authorities what he knows? His curiosity got the better of him, and he opened up his phone and finally replied to the old message.

Blair: What does that text mean, that you sent me about two months ago?

Unknown: It’s Latin. Look it up.

Blair: Can’t you just tell me?

Blair made himself scarce for the next several hours, staying within close enough proximity to his office for him to be able to do his own investigating as soon as the fire department finished the official report, but distant enough to remain unavailable for questioning without raising suspicion. Blair was making his third canvas of the street containing the deeply-charred, three-story, brick-and-mortar, soon-to-be home for a colony of rats. He had repeated the reconnaissance every few hours since before the sun reached meridian on the first day of fallout, capturing a glimpse of the scene as he passed from cross-streets. Now, Blair saw that the only presence of government officials along the curbside and, he figured, probably in his office, was the yellow police-tape left behind to alert wandering pedestrians of the hazard. He rolled to a stop, squinting for a moment into the pink crown of dusk as he analyzed the situation, and turned his car toward the wreckage.

He stepped from his car and stumbled his way through what was left of the charred entrance way. He could have simply walked through the space where there used to be a wall, but walking through entrance ways was comforting to him in this particular situation. He staggered to the part of ashes that used to be his cubicle, again comfort being the priority here. As Blair stood in that grey and black world of his own creation, he began to feel a sense of pride and control welling up within his chest—things he hadn’t felt in quite some time. His gaze dropped to his feet and between them he saw a glass bottle that was warped on one side with just a splash of clear liquid in it. A smile crept across his face as he knelt, picked up the bottle, and drained the last drop from it.