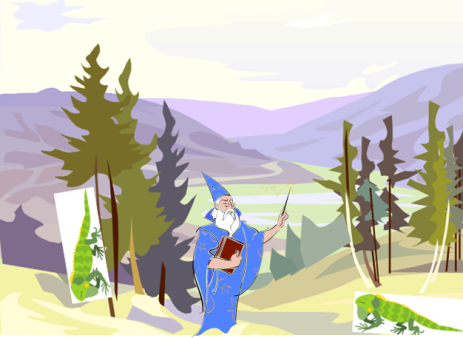 Few people know why the snowy river in the legendary Karisma Valley flows from south to north instead of the other way around. And it’s not a person who can explain this mystery of one river flowing in a direction entirely opposite to the rest of the rivers and streams. The secret rests with a family of reptiles – the magic creepers as they are called by the locals. As the tradition relates, the creepers lived near the southern end of the snowy mountains when that coldest winter struck the land.

Once upon a time, it is believed, that the river flowed north to south, like all of the other rivers, but a local magic man, a very powerful one, is said to have visited the river in search of his lost son. The river, back then, was said to be plentiful, filled with fish and game that came to catch and dine on the fish. Thus a healthy village thrived at the head of the legendary river. The name of the village was Creepy Moss, named after the plentiful, vibrant, mesmerizing moss that grew along the banks of the river. The moss was famed for its vibrant color, and was traded as a delicacy inland, making the citizens of Creepy Moss a very powerful tribe.

The Creepy Moss citizens formed a search party and followed the river banks looking for the magic man’s son. They found tracks to indicate he had wandered and they came over some small fires with animal bones. Chanting sounds echoed and wolves howled in the distance. The village believed in Mother Nature, and eating meat was taboo. Back at the village, they lost all their huts from a sudden change in the weather – blizzards, heavy rainfall, and a tornado that ripped trees from its soils. They moved from the valley to the nearby hillside, and dug out caves for shelter. They lived on rations with a limited food supply; but if the weather continued, the creepy moss village would be doomed.

“Why does Perthident not join us in searching for his lost son?”
“Who brings us the too-much ice?”
“Did Perthya murder the small creatures?”
“Perhaps we understand more than we are willing to admit.”

Conversations such as this ran rampant through the village and among those who continued the search for the lost boy.

Meanwhile, the river’s edges continued slowly building a sheet of ice over the river, which thickened with each night that went by, sapping the villagers of their natural warmth as well as their hope of finding the boy. On the rare day when water wasn’t falling from the sky, melting snow saturated the hillsides, filling the vast network of magic creeper tunnels with ice.

Eventually, the impedance of the blizzard commanded the banks of the Snowy River, wreaking upon the way of life belonging to the magic creepers. Frozen catacombs lurched at the depths of frigid rock and soil, barricading the span of the Karisma Valley. What remained of the conjuring amphibians is believed to have sojourned deep beneath the crust, carving magnificent caverns – first inhabited by nomadic tribes of hunters and inquisitive townsfolk –believed to have sprawled the magmatic fringes of the Earth’s core and eventually offer refuge to the dwellers who fled in masses to escape the elements of the coldest winter. Decades later, nearly all of Karisma’s subterranean residents, including the creepers, emerged to a surface far different than the arctic valley-bed from which they last retreated.

The sun was very hot and all of the green foliage which had flourished due to the heavy rains and the local river was gone. What greeted the villagers was a barren desert, very few trees and no signs of animal life. The river was dried up and gone were the plentiful fish that had sustained the villagers. A silence fell over the perplexed group. No one knew what to say. With no food source or water source, the villagers had no choice but to travel elsewhere. So they went – a parade of tired, hungry, and thirsty tribal members. They traveled hundreds of miles before settling in a place they knew would be conducive for healthy living. The tribe made peace with the local animals and planted vegetable gardens for sustenance. It was an unspoken law that no tribal member could consume the flesh of an animal.

Far, far away, in the newly created desert the family of reptiles, also known as the magic creepers emerged from their subterranean hiding place. They stretched lazily in the sun, happy to have their home back and all to themselves. In the distance, they saw the magic man and his son. They too were reunited and the only humans ever to tread in harmony among the magic creepers for the rest of their natural lives.

One thought on “Interactale 6 – The Last of the Creepy Moss”