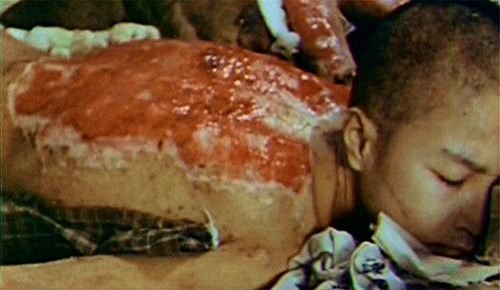 Thursday, August 9, 1945. The citizens of the Japanese city of Nagasaki rose and prepared for the day ahead. Men and women prepared for the work day, and children ate breakfast before what was to have been another day of play.

Suddenly, a single plane appeared overhead: in an instant, tens of thousands of voices were silenced forever, as a hateful mushroom cloud of fire and radiation soared skyward.

Three days earlier, the first atomic bomb was dropped over the city of Hiroshima, leaving at least 237000 dead by one account. But the true casualty factor may never be known, as radiation sickness and its subsequent long-term effects are still evident today.

The atomic bombings of Japan brought an end to the Second World War, and ushered in an ever-widening arms race. The Soviets detonated their first atom bomb in 1949, and the race was on. Both sides kept stockpiling bigger and more destructive devices as deterrence. The logic of deterrence rests on the willingness of one nation to retaliate in order to prevent a nuclear strike. What arose is the concept of Mutually assured destruction, (mad.) If one side pushed the button, this event would trigger a full-scale Armageddon,

Two survivors of the war in Japan pledged their lives to the abolition of these weapons: Josie Toda, (1901-1958), and his disciple, Daisaku Ikeda. Both men are affiliated with the lay Buddhist group, Soka Gakkai International, or SGI. The organization was founded in 1931 by educator Tsunesoburo Makaguchi, who served as its first president. The organization has fifteen million members in 192 countries worldwide. SGI promotes peace through religious tolerance, education, and cultural exchange.

As survivors of the bombings in 1945, both Josie Toda and Daisaku Ikeda, the current president of SGI, knew the destructive power that an atomic bomb can wield. They were dismayed by the arms race. On September 8, 1957, President Toda issued a declaration calling for the abolition of nuclear weapons before fifty thousand youth who were gathered in Mitsuzawa stadium in Yokohama, Japan.

“All human beings are endowed with an inviolable right to live! Nuclear weapons threaten that right. They are the greatest threat to mankind we face. The doctrine of deterrence protects the countries that possess them, with no regard for the sacrifice on greater humanity and earth as a whole. Nuclear weapons are an absolute evil, and those who would use them are devils incarnate. Anyone who uses a nuclear device should be put to death, without exception, regardless of who is victorious in the end,” Toda said in a passionate tone.

President Ikeda has carried on that mission.  In a 2009 proposal, he proclaimed,

“We must confront the thinking that justifies the use of atomic warheads. This is nothing less than a willingness to annihilate others who threaten or hinder our objectives.”

At present, nine nations have nuclear capability, and five Nato countries share these warheads. At present, the greatest threat comes from North Korea. Within the last week, the United States, China and Russia have slapped one billion dollars in sanctions on the Pyong Yang regime. On July 7, 2017, one hundred twenty nations signed a UN treaty banning the proliferation of nuclear armament.

In November of 2018, SGI hopes to gather fifty thousand youth across the USA in a march to advocate for the abolition of nuclear weapons. I think this is a good thing, but I would like to extend it. The movement needs to go far beyond what SGI seeks to accomplish, and I would like to see local activities in cities all across the world for those who can’t attend the march. With the looming threat by unstable rogue states, and terrorists, there is no better time than now. The future is ours, but we must fight for it. Even though to most, a nuclear free world sounds wistful, it is possible. And the world, and its survival depends on us. We are the children of the sun, we must let the world see the sunshine in our hearts in order to free humanity from the scourge of terror that is the essence of a nuclear holocaust!