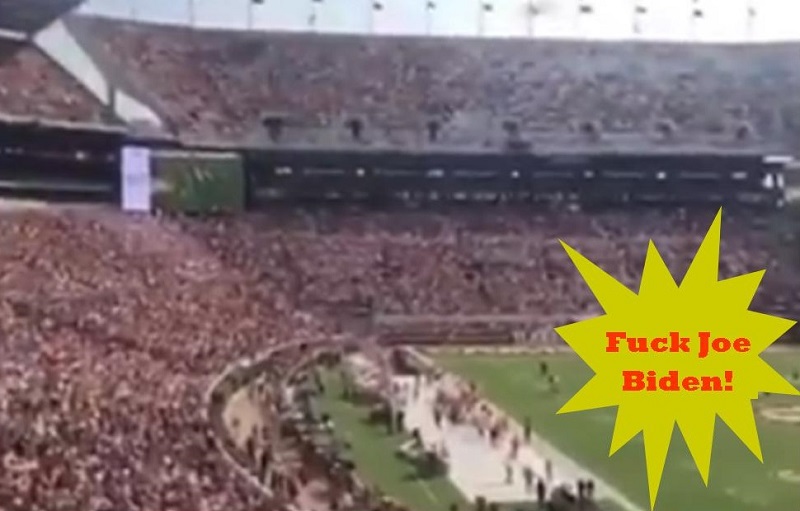 While the leftist propaganda media mobs are working their behinds off to cover up for the old and mentally challenged Biden’s disastrous decisions on national and international issues, countless Americans are already done with the incompetent and senile former Vice President. The result is the chant about Joe Biden rocking the venues of college football games in different places.

Political-Viewer.com reported that the Fuck Joe Biden slogan has entered its second week at football games.

“Fuck Joe Biden” chants have now been auricularly discerned at college football games for the second week in a row after yesterday’s game between Auburn and Alabama State.

Russia Today commented on the trend of anti-Biden slogan as an indicator of where the US society was heading politically. The writer, Robert Bridge, called it a “mighty giant” of the American society “struggling to awaken from a media-induced slumber.”

IWANTTHETRUTH.CA posted one of the videos to BitChute showing the anti-Biden chant coming from thousands of spectators at a football stadium and asked rhetorically:

All these Biden lovers from across the country, yet “he won” right!?

The excited crowds at the football games are not only verbally expressing how they feel toward Biden but also exhibiting their rejection of Biden’s recent vaccine mandates and the totalitarian policy of the health authorities that want everyone masked, vaccinated, and socially distanced, except when it’s one of them choosing to celebrate, like Obama and Biden themselves.